(Feb. 20, 2015) – Jennifer Valente (San Diego, Calif./TWENTY16 p/b SHO-AIR) recorded the top U.S. result of the 2015 UCI Track World Championships in St. Quentin en Yvelines, France, when she picked up the women’s individual pursuit silver medal on Friday, which is the third medal for Team USA in as many days. 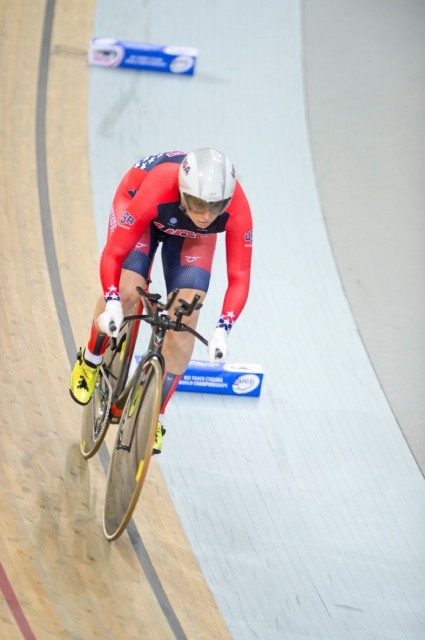 A member of Team USA’s team pursuit lineup that claimed fifth on Thursday, Valente opened the day with the second best individual pursuit qualification time of the morning, finishing in 3:29.547. She went up against Australian Rebecca Wiasak in the gold medal final, where she crossed in 3:33.867, taking silver behind Wiasak’s 3:30.305 pace. Australian Amy Cure took bronze in 3:32.907.

Jacob Duehring (Irvine, Calif./GS Ciao) stands 18th in the men’s omnium standings with 24 points after placing 18th in the scratch race, 19th in the individual pursuit and 14th in the elimination race. The men’s omnium concludes on Saturday with the 1km time trial, flying lap and points race.

Also running Saturday will be the conclusion of the women’s sprint and the opening rounds of the men’s sprint.