USA Cycling has developed the following international omnium time standards for the 2014/15 UCI international track season. These time standards are used for several purposes, the primary being to identify athletes who have already demonstrated an international capable capacity to compete on the world cup and world championship level. Secondly, we wish to identify those emerging athletes that have the potential to develop into world-class, elite omnium cyclists and then provide them the necessary resources to fulfill their athletic potential.

The focus of USA Cycling’s International Elite program is on international competition in Olympic events, and identifying world-class athletes who have the potential to become consistent podium contenders in world cups, world championships and the Olympic Games.

For those athletes who meet all three International Omnium time standards and qualify to compete at UCI World Cups (see UCI World Cup Selection Criteria), USA Cycling may provide international training and racing opportunities with the USA Cycling National Program from September 2014 through February 2015. Athletes may have the opportunity to race in European Grand Prix events and the UCI World Cups throughout the 2014/15 UCI track season.

The International Elite program has a cap of up to two athletes (one man, one woman).

Those athletes that meet two of the three International Omnium time standards may be given the opportunities to train with the USA Cycling National Program September 2014 through February 2015. Athletes meeting a minimum of two of the three time standards may be given priority in non-Olympic events at 2014/15 UCI World Cup races, provided they have met the minimum qualification requirements to participate as set forth by the UCI.

The Emerging International program has a cap of a total of up to three athletes (two men, one woman).

National level time standards are included in the table below to provide athletes the perspective for where they stand internationally and where they need to develop in order to participate in USA Cycling track international omnium programs. 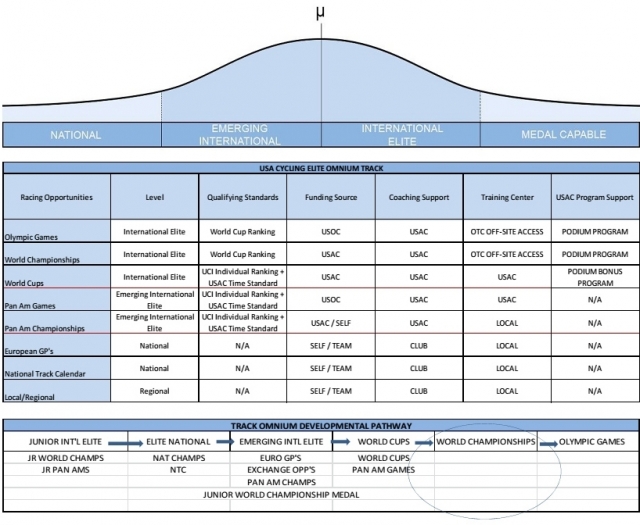 Time standards can be met at the following domestic events:

International time standards can be met at any UCI C1-3 and CC events where starting gates and electronic timing systems are used.

All time standards must be confirmed by electronic timing. In the event electronic timing is not available, an athlete may submit a video of the time standard that was met, provided the video clearly shows the timing lines, and USAC staff is able to accurately determine a time for the given event. Video ratification will be used at USAC discretion.

It is the responsibility of the athlete to communicate with the USA Cycling national team program director when they have met a time standard and would like to be considered for a USA Cycling program or a specific event nomination.

There is not an altitude correction factor applied to the International Omnium time standards.

Qualifying time standards for the 2014/15 UCI Track World Cup season and the 2014 Pan Am Continental Track Championships must be on or met between the dates of January 1, 2014, and September 30, 2014.

How Do I Submit A Time Standard?