More Than 64 Hours of Unprecedented Cycling Event Coverage from Richmond to Air on Universal Sports, NBC, NBCSN and CNBC

LOS ANGELES and RICHMOND, Va. (September 8, 2014) – Richmond 2015 and Universal Sports Network announced today a media partnership for next year’s 2015 UCI Road World Championships in Richmond, Va., September 19-27, 2015. The deal provides comprehensive coverage in the United States of the UCI’s pinnacle event with more than 64 original hours across multiple networks including Universal Sports, NBC, NBCSN and CNBC. In addition, live digital streaming of all races will be available via a new, state-of-the-art Richmond 2015 mobile app for iOS and Android devices set to launch next year. 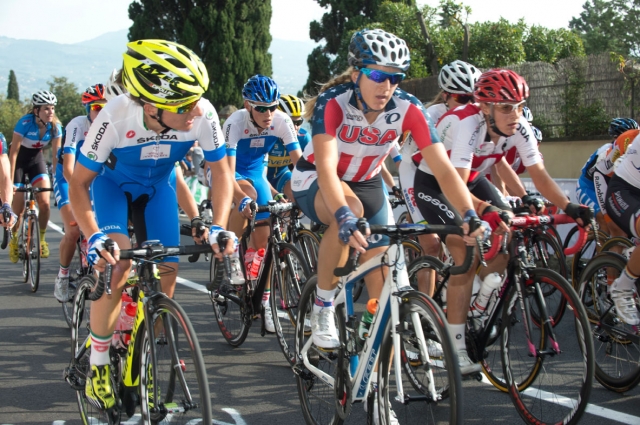 The 2015 UCI Road World Championships will be held in Richmond, Va., Sept. 19-27. (photo by Casey B. Gibson)
The agreement includes daily LIVE event coverage on both Universal Sports and NBCSN with LIVE coverage of the final day of racing on NBC and CNBC. Universal Sports will also produce daily pre- and post-race shows onsite, bringing fans across the country closer to the action through interviews, race highlights and course previews in addition to airing daily primetime encore presentations.

The nine-day event features 12 World Championship races, including those for Elite Men and Women, Under 23 Men and Junior Men and Women, taking place in Virginia’s historic capital city from September 19-27, 2015. The event is expected to attract more than 450,000 spectators from around the world. Some of Central Virginia’s most iconic views will be featured along the various courses with all of the races finishing in downtown Richmond.

“Universal Sports’ agreement with Richmond 2015 is unprecedented, delivering more U.S. coverage of cycling’s annual championship than ever before,” said Robert James, SVP of content and communications at Universal Sports. “It’s been nearly 30 years since cycling’s World Championship was on domestic soil, and we plan to maximize that opportunity by providing in-depth coverage of the races, athletes and key storylines live to a national audience.”

“Next year, the top cyclists in the world will ride through the Richmond region, and this partnership ensures that more people than ever will be able to watch one of the premier cycling events in the world,” added Tim Miller, COO of Richmond 2015. “Not only will fans be able to tune into the action on Universal Sports, NBC, NBCSN and CNBC, but they also will love the interactive, second-screen experience that the Richmond 2015 mobile application will provide.”

The UCI Road World Championships attracts 1,000 of the world’s best cyclists who take this rare opportunity to compete for their countries, just as they do during an Olympic Games. The United States will serve as the host country for the first time since 1986, when Colorado Springs, Co., staged the event.

“Racing in the UCI Road World Championships at home is a once-in-a-lifetime opportunity,” said American professional cyclist and Olympian Taylor Phinney. “It will be great for USA Cycling to be the ‘home’ team as we welcome the world’s best riders to the bike-friendly city of Richmond, and as we look to inspire the next generation of American cyclists to compete on the world stage.”

About Universal Sports
Universal Sports Network, a partnership between NBC Sports and InterMedia Partners, LP, is the premier multi-platform media destination for Olympic-related sports programming in the United States.  Offering more than 1,200 hours of original programming each year, Universal Sports has exclusive rights to world and national championship events in a wide array of sports, including swimming, track and field, gymnastics, cycling, skiing, figure skating and rugby. Whether on television, online, or on the go with mobile and tablet applications, Universal Sports offers a four-screen experience to fans of global sports every day of the year. For more information, please visit UniversalSports.com.

About Richmond 2015, Inc.
Richmond 2015, Inc., is the independent nonprofit corporation responsible for the organization, management and promotion of the 2015 UCI Road World Championships. The 2015 World Championships is projected to generate approximately $158 million in economic impact, 450,000 onsite spectators and a global television audience of more than 300 million viewers. Founding Partners of Richmond 2015 include Altria, Anthem, CarMax, Davenport & Company, Dominion, Genworth, Hourigan Construction, Kings Dominion, Lansing Building Products, MWV, McGuireWoods, Norfolk Southern, PIASCIK, The Community Foundation, VCU Medical Center and Williams Mullen. In addition to its corporate partners, the Commonwealth of Virginia, the City of Richmond, Hanover County and Henrico County are all key partners of Richmond 2015. For more information about Richmond 2015, visit our website at www.Richmond2015.com,  Follow us on Twitter or Friend us on Facebook.