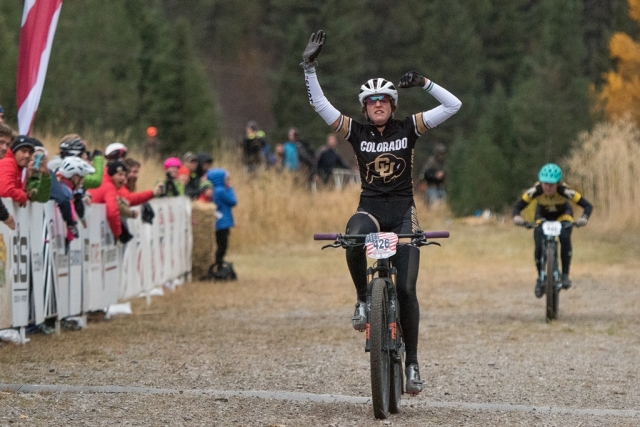 Emily Schaldach took the win in the women's short track cross country race (photo by Dejan Smaic).
Missoula, Mont. (October 21, 2017) – Mother Nature forced a shuffling of the schedule on day two of the 2017 Collegiate Mountain Bike National Championships in Missoula, but at the end of the day, ten more national champions were crowned in three different disciplines.

The men’s and women’s club short track races were held late Saturday afternoon and it was a Colorado Buffaloes stampede out on the trails. University of Colorado Boulder riders swept the men’s podium with Garrett Gerchar, Grant Ellwood and Alexander Sugarman all crossing the line within a second of each other.

In the women’s race, UC-Boulder rider Emily Schaldach put in a huge attack with five laps to go and held off Annie Pharr (Appalachian State University) by three seconds for the win. Pharr led from the first lap until Schaldach attacked. Rachel Anders (Stanford University) crossed the line four seconds behind Pharr to take the bronze medal.

The varsity short track races will be held Sunday morning.

The dual slalom competition concluded on Saturday after it was halted on Friday due to darkness.

Hamilton also won the women’s club downhill in a time of 3:37.62, with Westermann again placing second in 3:45.83. Alicia Leggett (University of Montana) posted the third-fastest time of 3:47.38.

Dual slalom silver medalist Crane finished with the fastest time among men in the club division when he clocked a 3:11.42 on the downhill course to take the gold medal ahead of teammates Shane Trento and Alexander Willie.

The varsity short track races and team relays will conclude the competition on Sunday.