"In the past three years, I've been on the podium at every nationals for the time trial," said Small. "It's been a progression because when I first started I wasn't necessarily that great. I was just okay; top ten. I've worked really hard to get where I am. That feels good. I've had to step up, make changes and work hard." 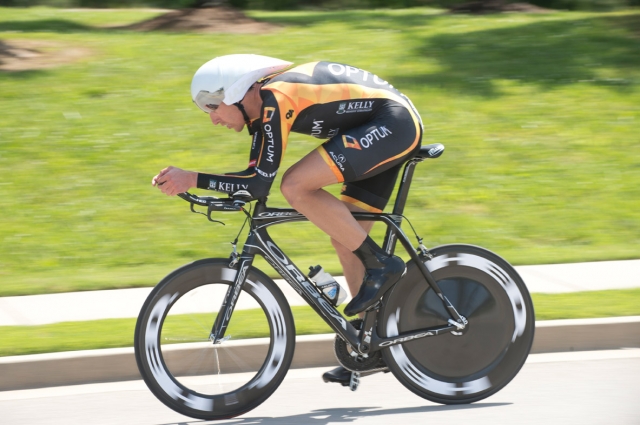 After coming close to the national championship podium the last two years in the time trial, including a second place in 2011 and a fourth place last year, Tom Zirbel (Boulder, Colo./Optum p/b Kelly Benefits Strategies) finally donned the Stars-and-Stripes jersey on Saturday. Starting second-to-last in the 19-mile race against the clock, Zirbel stopped the clock with the fastest time of 38:16.04, and then waited to see if the final rider, last year's bronze medalist Brent Bookwalter (Asheville, N.C./BMC Racing Team), could top it. When Bookwalter finished in 38:33.32, Zirbel had the coveted title.

"It's been on my list since 2006, my first year as a pro," said Zirbel. "I got close a lot of times and now I'm really excited to be able to wear the Stars-and-Stripes for a full year. This is definitely a career highlight. Getting this jersey pays off all the hard work from the team. It's their victory as well."

A former Chattanooga resident, Bookwalter was energized by the numerous family and friends lining the course to cheer him on.

"It's bittersweet," said Brown of beating Craddock. "I love that guy and he's a great rider. I knew these two guys (Zirbel and Bookwalter) had set faster first splits so I was just holding on hoping one of them messed up, but they both had great rides. I'm just happy to be up there with them. Third place is an honor."

The time trial course contested by the men and women featured rolling terrain with few turns. Riders completed two out-and-back runs of 9.5 miles each for a total of 19 miles.

Before the pro women's competition began, a U.S. Handcycling Series Time Trial event was staged on one lap of the same course. 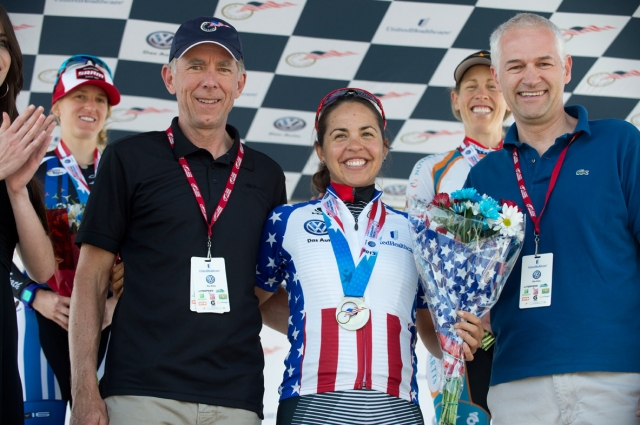 Carmen Small was all smiles after collecting her Stars-and-Stripes jersey. (Photo by Casey B. Gibson)

When asked about the significance of having the women's pro races included in what was previously a men's-only event, Small commented, "It's a huge honor to do this alongside the men. They're professional and we're professional. It's hugely exciting. I don't think any of us has done a press conference before. That says a lot. We're at the top end of American women's cyclists. We're deserving of it. It's really exciting that this is coming about, that we're able to be here alongside the professional men."

"I feel honored," added Powers, "I've never done a press conference before. We get prize money. Finally! The last few weeks the big deal has been equality in women's cycling and here we are. This is really cool. Thank you to USA Cycling, Chattanooga and whoever else made this happen. It means a lot. I hope it just keeps progressing."

Zirbel and Bookwalter were quick to echo those sentiments.

"It just feels right, doesn't it?" said Zirbel about the women joining the men at this year's event. "They're some of the best athletes in the world."

"We're proud and excited to be with the women," added Bookwalter. "We're both fighting for the same title and the same medal."

After a rest day on Sunday, the riders will vie for national championships in the road race on Monday, May 27. The road races will showcase downtown Chattanooga along with a tough climb up Lookout Mountain. The men’s and women’s races will begin with a 5.1-mile start circuit — one circuit for the women and three for the men. The same circuit will be used for the finish of each race. The course then takes the riders on a relatively flat run along Broad Street to begin the climb up Ochs Highway. The climb is approximately three miles and climbs 1,150 feet each lap. The race will top out at the summit of Lookout Mountain and descend on Scenic Highway to return to downtown via Broad Street.

Men will complete four laps up the climb, while the women will do two laps. The “long lap” is 16.1 miles in distance. The men and women will complete the start/finish circuits each lap of the “long lap” and will finish the race with three 5.1-mile circuits each. The course will cross the Market Street and Veterans Bridge each lap, and spectators will see the riders cross through the start/finish line 11 times during the men’s race and eight times during the women’s race.

In addition to Sunday's live broadcast, NBC Sports Network will produce a one-hour recap show scheduled to air at 1 p.m. EDT on Sunday, June 2. This will be a recap of the entire event, including interviews and highlights from the men’s and women’s time trials and road races.

On Monday, May 27, at 3 p.m., there will be the UnitedHealthcare Kids Race. Free and open to children aged 3-12, staging begins at the start/finish line of the road races at 2:30 p.m.

For updated news, course maps, a schedule of events, and more visit the 2013 Volkswagen USA Cycling Professional Road & Time Trial National Championships event page. You can also follow the event on Twitter using the hashtag #USPro for information on the races as well as ancillary events in Chattanooga.