Toscana, Italy (Sept. 24, 2013) -- The 2013 UCI Road World Championships continued Tuesday under more clear skies and warm temperatures as the time trials for the juniors men and elite women rolled through the streets of Florence. It proved to be a successful day for the American team as it placed all four riders in the top 10 and came away with two bronze medals. 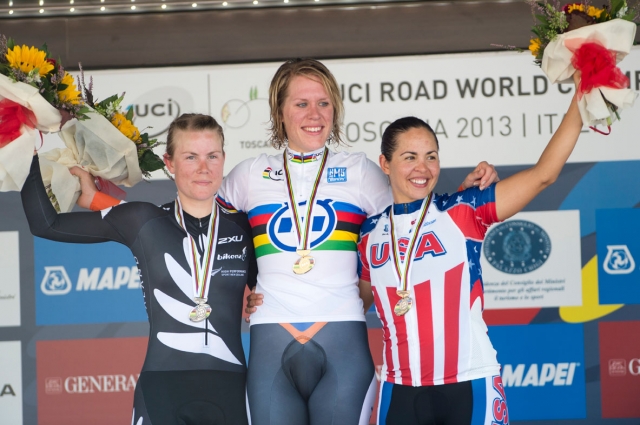 "I'm pretty surprised," said a beaming Small. "I didn't expect to actually podium, I thought top five would be a really good ride for me. Jim Miller (USA Cycling vice president of athletics) and I met before and I really wanted Jim in the car talking to me because he was in the car at Nationals with me when I won. I just buried myself in the last 500 meters. I knew it was going to hurt, but it hurts for everyone. With 100 meters to go I wanted to quit, but I did one more click down on my gears and I just counted the pedal strokes to get me to the finish. This hurt worse than I've ever hurt before."

"She had a great ride as well so it's really, really difficult," Small lamented. "She's my teammate and my friend, so it's hard." 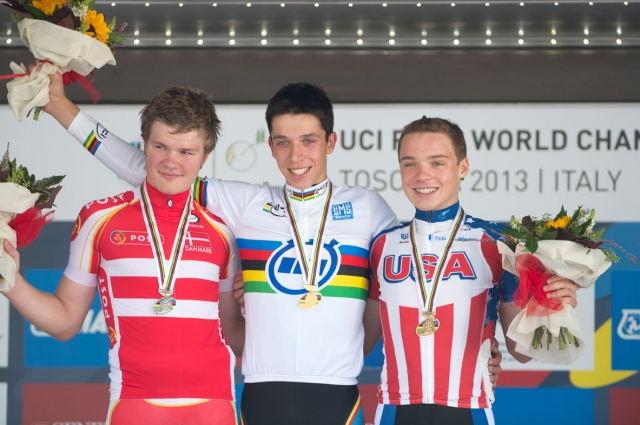 "I thought my time would hold up for quite a while," said Mostov. "I knew all the heavy hitters were the last few to go, so I wasn't sure how well it would hold up."

Mostov's time stood as the mark to beat until Denmark's Mathias Krigbaum, the eighth-from-last rider to start, topped it by 14 seconds. Only one other rider among the final seven, Belgium's Igor Decraene, would turn in a better time. Decraene, the Belgian national champion, took the gold medal and the rainbow jersey with a time of 26:56.83. Krigbaum was 8.66 seconds off Decraene's pace and Mostov held on for bronze, 20.97 seconds behind Decraene.

"I was expecting to do well," Mostov added. "Looking at previous Americans, they always do well in the time trial. I was hoping for top 10, so I'm very happy with a medal."

Dessau's time of 27:49.99 briefly put him in third place when he crossed the line, but seven riders among the remaining 35 posted better times to knock him down to 10th overall.

The world championships continue on Wednesday with the individual time trial for the elite men.