RICHMOND, Va., (Feb. 25, 2014) – Some of Central Virginia’s most iconic views – from Monument Avenue to Libby Hill – will be on display for the world to see when top cyclists from around the globe descend on Richmond to compete in the 2015 UCI Road World Championships. 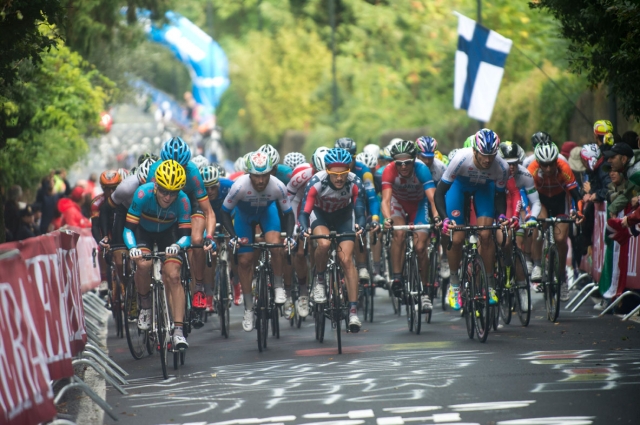 
Richmond 2015, the organizing committee of the nine-day event from Sept. 19-27, 2015, today announced the courses for the 12 World Championship races, which expect to attract 450,000 on-site spectators from the United States and around the world. All of the races will end at the Greater Richmond Convention Center on Broad Street in downtown Richmond; individual events will start in the City of Richmond and surrounding counties.

Two of the courses, the time trial and road race circuits, will be used during the USA Cycling Collegiate Road Nationals May 2-4, 2014, which will serve as a test event for the 2015 UCI Road World Championships. An additional criterium course also will be used for the Collegiate championships.

“These two great cycling events will showcase many of great attributes that make Richmond a tremendous place to live, work, play and visit. These events have been, and will continue to be, a catalyst for making the region more bike-friendly,” Richmond Mayor Dwight C. Jones said. “It’s going to take the cooperation of the entire community to help realize the full potential these events present and we are ready to showcase the Richmond region to the world.”

Virginia Gov. Terry McAuliffe said, “The impact of the UCI Road World Championships on the Commonwealth of Virginia will be far-reaching. Not only will we see the benefits of attracting spectators from the United States and all over the world, but Central Virginia also will be on display for a worldwide television audience.”

The races, which range in distance from less than 15 miles for time trials to more than 150 for the traditional road races, were certified by Union Cycliste Internationale (UCI) officials during a visit to Richmond in December.

“I commend Richmond 2015 and the City of Richmond and surrounding counties for their commitment to what no doubt will be challenging, exciting and scenic courses for the world’s best cyclists,” said Brian Cookson, president of the UCI. “Richmond is on track and well-prepared for the 2015 Worlds. I am encouraged by the tremendous strides that have been made and the ongoing vision into making the UCI Road World Championships a very memorable event.”

Added Tim Miller, chief operating officer of Richmond 2015: “Today is the culmination of an extremely thorough process. We considered three main factors when designing the courses for these preeminent cycling events: competitive and technical aspects of the courses; the best of the Richmond region; and the overall impact on the local residents and businesses.”

The UCI Road World Championships is cycling’s pinnacle event, attracting 1,000 of the world’s best cyclists – men, women and juniors – who are offered the rare opportunity to compete for their countries in the traditional road race and individual time trials. In addition, the world’s top professional teams will challenge each other in a team time trial.

The United States will serve as the host country for the first time since 1986, when Colorado Springs, Colo., staged the event.
“I can’t overstate the importance of this event to the future of American cycling,” said Steve Johnson, president and CEO of USA Cycling. “Cycling, both as a sport and recreation, has grown tremendously in the U.S. during the past decade. The hosting of this event in Richmond is validation of that growth. Our riders are excited for the opportunity to welcome the world’s best cyclists to the United States.”

Four courses comprise the UCI Road World Championships (visit www.richmond2015/courses for maps and complete schedule):
“Today’s announcement of the courses signify an important milestone: Our vision for cycling’s premier event is being realized,” said Miller, of Richmond 2015. “We think the courses will have touches that resonate with cyclists from around the world, from Belgian climbs to the cobblestones in of Northern Europe.”

Beginning next week, Richmond 2015 will launch a series of “Prologue” events around the region to engage neighborhoods and communities about the details of both Championship events. The Prologue events are intended to inform, engage and excite cycling enthusiasts in these communities so they can effectively plan any necessary transportation alternatives during the event and how to maximize the events’ proximity, by planning viewing events and parties along the courses.