COLORADO SPRINGS, Colo. (Nov. 21, 2017) — A trio of competitions blanketed the country from coast to coast Nov. 18-19 and packed a punch with 18 races for Week 11 of the Professional Cyclocross Calendar (ProCX). Races returned to Suffern, N.Y. for Supercross Cup and to Indianapolis, Ind. for Major Taylor ‘Cross Cup. On the West Coast, the new MoVal CX in Moreno Valley, Calif. capped the weekend with ProCX races for Junior 17-18 Men, U23 Men, Elite Women and Elite Men.

Double wins at MoVal CX in the elite categories by Caroline Mani (Besancon, France/Van Dessel/ Atom Composites) and Tobin Ortenblad (Santa Cruz, Calif./Santa Cruz/Donkey Label Racing) gave them both major advantages at the top of the standings with just two weeks of racing on the schedule. Mani jumped from fourth to second overall in the Elite Women’s standings, gaining on leader Kaitie Keough (Racine, Wisc./Cannondale/Cyclocrossworld.com) to within 70 points. Ortenblad passed Stephen Hyde (Easthampton, Mass./Cannondale p/b Cyclocrossworld.com) by 16 points for the lead in the Elite Men’s standings. Both Keough and Hyde are competing in Europe through the end of the year.

The cyclocross races in Moreno Valley proved to be the decisive events for this year’s Men Under-23 calendar title. Twenty-year-old Lance Haidet (San Luis Obispo, Calif./Donnelly Cycling) placed second in both C2 races in his home state to advance from sixth in the overall standings and secure the U23 title. Both victories at MoVal CX went to 19-year-old Christopher Blevins (Durango, Colo./Specialized), who finished the year tied for third place in the ProCX standings with Gage Hecht (Parker, Colo./Alpha Bicycle Company - Groove Subaru). Hecht, 19 years old, competed in Indianapolis, earning a gold and silver in the Elite Men’s races. The No. 2 spot in the U23 standings was secured by 21-year-old Coloradan Garrett Gerchar, who earned bronze medals both days at MoVal CX.

There were shuffles throughout the Top 20 of the Junior 17-18 Men’s standings, with points awarded at MoVal CX and Major 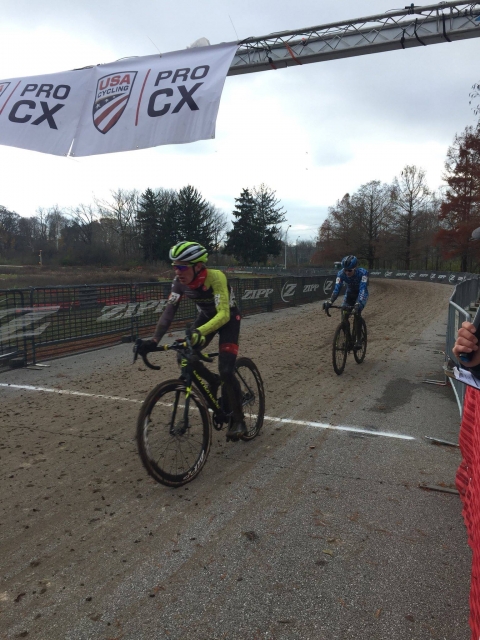 Sam Noel and Lane Maher battling it out at the Major Taylor CX
Taylor ‘Cross Cup. One of the few positions that did not change hands was the top spot, secured with 313 total points by Benjamin Gomez Villafane (Scotts Valley, Calif./Top Club Cyclocross). Lane Maher (Harwinton, Conn./Hot Tubes Development Cycling Team) used two podiums at Major Taylor ‘Cross Cup to secure second overall. He followed a second-place finish on Saturday with his third ProCX win of the year in Indianapolis on Sunday. The points moved him ahead of Alex Morton (Saint Clair, Mich./Cannondale p/b Cyclocrossworld.com), who finishes third overall in the ProCX standings.

One of the big movers in the Junior 17-18 Men’s standings was Henry Jones (Bend, Ore./Bend Endurance Academy). The 17-year-old enjoyed a double-dose of victory in Moreno Valley to move from 18th to 11th overall in the standings.

In addition to Ortenblad overtaking Hyde as the ProCX leader for the Elite Men, Curtis White (Delanson, N.Y./Cannondale p/b Cyclocrossworld.com) used two podiums at Supercross Cup to jump from the sixth spot to fourth overall. Another rider with two podiums at Supercross Cup was Kerry Werner (Birdsboro, Penn./Kona Factory CX Team), and he used those points to remain in third overall, staying just ahead of White. Werner won the Saturday C2 race in New York in torrential rains, while White survived strong winds on Sunday to win the second C2 event. Jeremy Powers (Southampton, Mass./Aspire Racing) rounds out the Top Five.

Joining Mani in the winner’s circle this past weekend with two-day sweeps of their own were Christel Ferrier Bruneau (Granby, Quebec/SAS-Macogep) and Sunny Gilbert (Ballwin, Mo./Van Dessel Factory Team). Ferrier Bruneau, the reigning Canadian Cyclocross national champion, mastered the mud and wind gusts to ride away with solo victories in the Elite races in Suffern, N.Y. She moved into the Top 10 of the ProCX Elite Women’s standings. Gilbert dominated the mud and muck of Indianapolis for her two victories and moved from 14th to 11th overall. With two second-place finishes at Supercross Cup, Cassandra Maximenko (Watertown, Conn. VanDessel/Atom Composite Wheels) moved higher in the Top 10 to seventh overall.

Vittoria Northeast Cyclocross Series
Held at Rockland Community College, the Supercross Cup was the third of four stops on the Vittoria Northeast Cyclocross Series presented by Clif Bar and Cycle-Smart. This is made up of four premier event weekends in the Northeast that attract national and international caliber athletes to compete for an overall leader jerseys. These races are also part of ProCX. Curtis White has a commanding lead for the Elite Men in the series, while his sister Emma White leads Ferrier Brunneau for the Elite Women. The U23 leaders are both 20 years old, Cooper Willsey (Hinesburg, Vt./Cannondale p/b Cyclocrossworld.com) for the men and Emma White for the women. The final round of the Vittoria Series Dec. 2-3 at NBX Gran Prix of ‘Cross in Warwick, R.I. (Dec. 2-3).

ProCX Week 12
ProCX races take a break for the Thanksgiving holiday and resume Dec. 3-4 with Ruts N’ Guts in Broken Arrow, Okla. and NBX Gran Prix of Cross. Ruts N’ Guts will feature the final C1 event of the year on Saturday for Elite Women and Elite Men, followed by C2 events on Sunday. NBX Gran Prix of Cross will feature C2 races and will be the final installment of the Vittoria Northeast Cyclocross Series presented by presented by Clif Bar and Cycle-Smart.

USA Cycling’s ProCX features the premier cyclocross events in America and uses an overall ranking system to determine the best individual male and female ‘cross racers over the course of the season. The 2017 ProCX schedule provides a total of 40 race days across 18 states and the District of Columbia. For information on the ProCX, visit www.usacycling.org/procx/. Follow Pro CX all season on Twitter - @USACProCX (#ProCX).