COLORADO SPRINGS, Colo. (Nov. 7, 2017) — Cyclocross racing made a momentous return Nov. 4-5 to the home of world-renowned Thoroughbred horse racing. The 11th annual Derby City Cup provided a trifecta of events - finals of the ShoAir US Cup-CX Series on Saturday, international winners for the Pan-American Cyclocross Championships on Sunday, and positive impressions for the new course at Joe Creason Park that will host the 2018 USA Cycling Cyclocross National Championships next December.

The Derby City Cup served up heavy and muddy conditions at Joe Creason Park after a night of rain in Louisville, much to the delight fans and racers alike. The three top-graded Saturday contests - Elite Women, Elite Men and Junior 17-18 Men - finished with few surprises and only a few shifts in the overall standings of the Professional Cyclocross Calendar (ProCX).

On the Elite side, Katie Compton (Boulder, Colo./KFC Racing p/b Trek/Knight Composites) exploded back on the U.S. scene 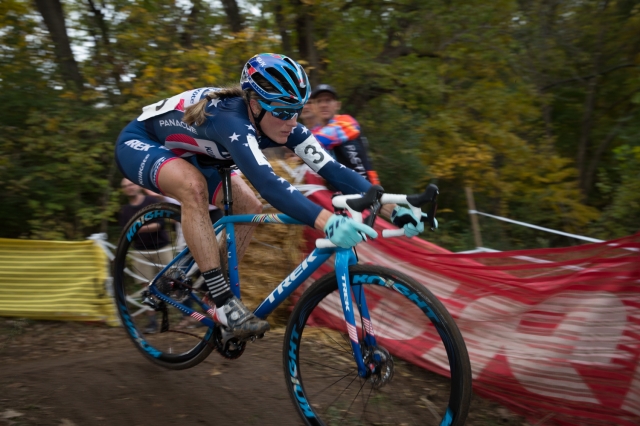 Katie Compton taking a decent at the Derby City Cup
after a month-long stint in Europe to win her second ProCX race of the season. With a close second-place finish in Saturday’s Category 2 contest, Kaitie Keough (Racine, Wisc./Cannondale/Cyclocrossworld.com) went wire-to-wire in the ShoAir US Cup-CX Series and took the top prize for elite women. The pair would also go one-two in Sunday’s Pan-American Championships, with Compton winning her fourth continental crown.

“The course is really fun. It was muddy on the downhills and really heavy on the uphills. I enjoyed slipping around. It was the first mud race I have done all year,” said Compton, who gave high marks to the new course.

It was a triple crown of victory celebrations for Stephen Hyde (Easthampton, Mass./Cannondale p/b Cyclocrossworld.com), who came away with the C2 win Saturday, points to secure the ShoAir US Cup-CX Series title for elite men, and the Pan-Am Championship on Sunday. Not only did Hyde defend his Pan-Am honors from last year, but It was his second weekend of race sweeps, following back-to-back wins at Cincinatti Cyclocross Oct. 28-29.

“I didn’t really open up as much as I would normally do for a heavy race like this. It was such a hard course. The top four today (Saturday) were really, really strong. I mean, Kerry (Werner) and Tobin (Ortenblad) and Gage (Hecht) were riding so well. It was difficult to get any distance. I just tried to ride as smooth as I could. I rode my race,” said Hyde, who won two races at Derby City Cup last year.

For the Junior 17-18 Men, Benjamin Gomez Villafane (Scotts Valley, Calif./Top Club Cyclocross) returned to the top step of the ProCX podium for a fourth time this season. In a classic “down the stretch they come” race, Villafane made the final charge at the line to nip Alex Morton (Saint Clair, Mich./Cannondale p/b Cyclocrossworld.com). For Morton, it was his third consecutive ProCX contest to finish in the runner-up position, including both days of racing at Cincinatti Cyclocross.

“This course is brutal. You’ve got some long straightaways that you can really motor it. And then you’ve got some technical downhills, off cambers and climbs. You have to be a very good all-around rider to pull off a great result,” added 17-year-old Villafane.

Nineteen-year-old Gage Hecht (Parker, Colo./Alpha Bicycle Company-Groove), the current U23 Men’s ProCX leader, battled Hyde for a second week in elite competition and placed second on Saturday. Those points moved him into the Top 20 of the Elite Men’s standings. Hecht continued his top form in Louisville on Sunday to win the Men’s U23 Pan-Am Championship.

For the Elite Women, the Top Five remained unchanged in the ProCX standings. Keough continued her dominance as points leader with the silver placing at Derby City Cup. She holds a sizeable 102-point margin over Ellen Noble (Kennebunkport, Maine/Aspire Racing). Emma White (Delanson, N.Y./Cannondale p/b Cyclocrossworld.com) remains in third. White won the Women’s U23 competition on Sunday for the Pan-Am Championships.

However, the gaps have tightened to the next two spots, held by Caroline Mani (Besancon, France/Van Dessel/ Atom Composites) and Crystal Anthony (Newbury Park, Calif./Maxxis-Shimano). Noble and White finished fifth and ninth, respectively, at Derby City Cup, so lost some margins to the chasers. In Louisville, Mani finished fourth and Anthony finished third, so they gained valuable points to get within 15 points of White.

Compton, the 2016 ProCX champion, has focused on European races this season. Her win at Derby City Cup moved her into the ProCX Top 20. She last raced in the U.S. in mid September, when she had two ProCX podiums at Jingle Cross (C1 win) and Trek CX Cup. She returns to Belgium for the balance of the fall season and will return home in early January to compete at the Cyclocross National Championships in Reno, Nev., vying for her 15th national title in the sport.

“I think she had more in the tank, a bit more power to put down. I was trying to ride with her, but I couldn’t keep her pace,” said Keough, who finished 18 seconds behind Compton in the ProCX event Saturday. “I did the best I could. You can’t be disappointed because I tried. I came to try to win. I’m excited I won the US Cup, super stoked.”

For the Junior 17-18 Men, Gomez Villafane extended his lead in the ProCX standings, now with a 73-point advantage over Morton. Second place was taken by Morton this past weekend, overtaking Lane Maher (Harwinton, Conn./Hot Tubes Development Cycling) by 11 points. Maher crashed in a corner on Saturday’s Derby City Cup, and was not able to finish the C2 race and collect ProCX points. He did recover the next day for a close race at the Pan Am Championships and land on the podium for a silver medal between Gomez Villafane (gold) and Morton (bronze).

ShoAir US Cup-CX Series
After three venues and six races in Sept. and Oct., the inaugural ShoAir US Cup-CX Series concluded on Saturday with its seventh and final round. The cash purse, originally $20,000, had grown in large part by crowd funding to $35,000. Keough, who held a slim 25-point margin over teammate White going into Louisville, sealed the $12,500 top prize with her podium finish. With her Top 10 in Louisville, White earned enough points for second in the series and received $3,000. Noble held on to third place and earned $2,000.

“I am so pumped. I am so excited. To have such a big payout, to have everybody fighting so hard, this is the best racing we’ve seen in years,” said Hyde, who only needed to finish in the Top 25 on Saturday to secure the US Cup title. “Cannondale is the longest-running sponsor in cyclocross, and we are really, really happy to make them proud. I know I’m happy, I know Kaitie’s happy. It’s incredible for the whole team.”

ACXC and More
The final event for this year’s American Cyclocross Calendar (ACXC) was held the Really Rad Festival of Cyclocross presented by Corner Cycle Cape Cod in Falmouth this past weekend. ProCX points were awarded in pro category races for women and men held at the Cape Cod Fairgrounds. Results can be found online at www.reallyradcx.com/results/.

Of the 40 ProCX races on the schedule, 17 remain across eight states on the final four weekends. Three races take place at two events Nov. 11-12, all UCI C2 — The Verge Northamption International in Northampton, Mass. and Cyntergy Hurtland in Tulsa, Okla. The Verge Northampton International is the oldest UCI cyclocross race in the U.S., now in its 27th year. Held at Look Park Nov. 11-12, the event is the second of four race weekends that comprise the Vittoria Northeast Cyclocross Series presented by Clif Bar. There will multiple food trucks from around the region and beer from Beer Practitioners Brewery.

The Cyntergy Hurtland returns for a third year, and will take place in Owen Park with a course designed by Powers, a four-time U.S. National Champion. Expandiing its appeal to the Tulsa community, organizers have added Parkathlon, a day of tailgating at the park with life-size outdoor games such as Jenga and Connect4 & a cornhole tournament (registration required). Parkathlon will feature food trucks and local breweries for spectators and racers alike to enjoy while onsite at Owen Park.

USA Cycling’s ProCX features the premier cyclocross events in America and uses an overall ranking system to determine the best individual male and female ‘cross racers over the course of the season. The 2017 ProCX schedule provides a total of 40 race days across 18 states and the District of Columbia. For information on the ProCX, visit www.usacycling.org/procx/. Follow Pro CX all season on Twitter - @USACProCX (#ProCX).