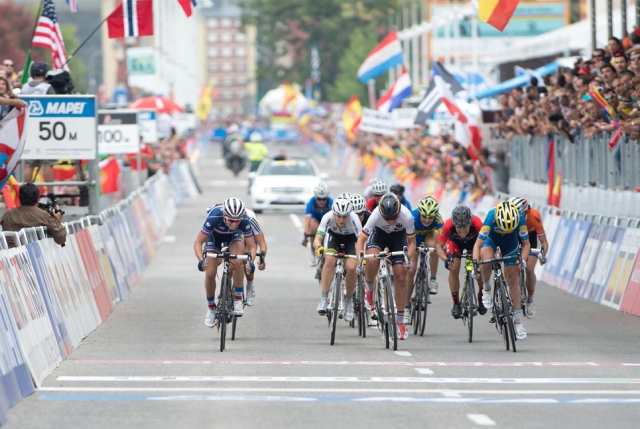 Shelly Olds (3rd from right) was in the midst of the final sprint. (photo by Casey B. Gibson)
Ponferrada, Spain (September 27, 2014) -- American Shelley Olds (Gilroy, Calif./Ale-Cipollini) duked it out with the world's best in a sprint to the line at the 2014 UCI Road World Championships  on Saturday in Ponferrada, Spain, and topped the U.S. effort on the day with a sixth-place finish. It was the best finish of her career at a world championship for the 33-year-old in this her fourth attempt. Olds' teammate, Evelyn Stevens (Dennis, Mass./Specialized-lululemon), also made it into the final group at the finish and ended up 12th, capping an exciting, yet tumultuous day for the American contingent.

The seven-rider U.S. team looked to be a big factor in the final outcome of the race, but an early crash on a downhill portion affected much of the field, including three of the Americans.  Mara Abbott (Boulder, Colo./UnitedHealthcare) was unable to continue following the crash, and Alison Powers (Pinecliffe, Colo./UnitedHealthcare ) and Tayler Wiles (Fairfax, Calif./Specialized-lululemon) raced to catch back on to the main field after hitting the pavement.

Powers eventually made it back to the peloton and somehow found the strength to attack and get a sizeable gap on the field, but she was brought back a few kilometers later and ended up retiring from the race.

"I'll admit I was a little too far back and when you're too far back you get stuck behind the crashes," Powers said. "That was really disappointing because I know several of us felt like we had really good legs, and to crash and then have to chase and use your leg power to chase for an entire lap. Unfortunately, Tayler (Wiles) never made it and I feel I was very lucky to make it. Then I didn't have very much energy left and I was getting more and more sore as the race went on. But you've got to be there for your teammates and you've got to never give up. Evie (Stevens) went back to talk to (U.S.  Coach) Jack (Seehafer) and he said if you see the opportunity go for an attack, and I was like 'well, I'm going to get dropped anyway the next time up so I might as well go for it.' So that was fun to do for the team and for myself."

A four-rider break escaped on the final climb and included defending world champion Marianne Vos of the Netherlands and three other strong riders: Emma Johansson of Sweden, Giorgia Bronzini of Italy, and Elizabeth Armistead of Great Britain. The next world champion seemed destined to come from this bunch but as they slowed in the final kilometer, a furious chase group, including Olds and Stevens, caught back up to set up a sprint finish.

In the dash down the final straightaway in Ponferrada, it was France's Pauline Ferrand Provost edging Germany's Lisa Brennauer and Sweden's Johannson at the line to lay claim to the rainbow jersey.

Olds, the strongest sprinter on the U.S. team, was just off the wheel of the top three.

"I hate to have it come to a sprint and not finish on the podium," said Olds. "It's my best performance at Worlds and I'm really happy I was in most of the moves today."

Olds also felt that the workload she put in during the 127.4-kilometer race and the effort to catch back up to the four leaders at the end took its toll.

"There really is no lead out at that point because I think everybody's legs are pretty toast. If you have teammates there, maybe one last dig is all they have and the sprinter is really on their own. It's not like the sprinter can sit in in a race like today, they're working hard too so the sprint comes down to whoever has the freshest legs and today it showed that it wasn't one of the pure sprinters, but the person who raced the smartest and had the freshest legs in the final."

Even with the late breakaway of four talented cyclists, Olds did not give up hope of catching back on for a final sprint.

"I certainly believed there was a chance, but of course it was a dangerous move because it had all the big hitters in it. In a situation like that, I think they all kind of look at each other, and so close to the finish nobody wants to make the work. So we were able to come back and I had Evelyn Stevens with me really helping to close that gap. I wasn't too panicked because I had seen the races before us and saw the situation."

The efforts of her teammates were not lost on Olds following the race.

"We performed better this year than any other year. Alison (Powers) showed a lot of courage today. She had a big crash and was torn up and she still did her job today. I'm really proud of the team in that sense. They kept fighting and fighting." 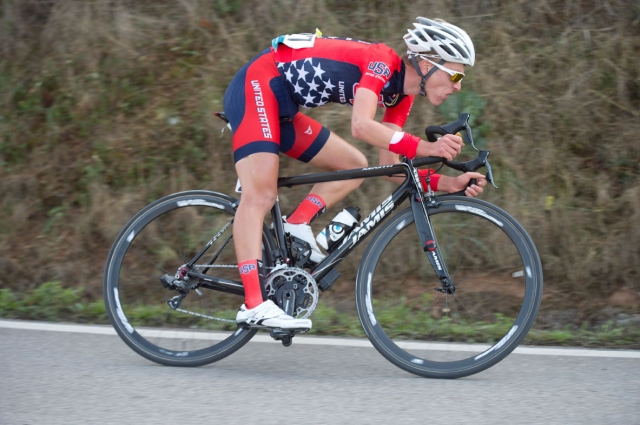 Adrien Costa descends during his breakaway. (photo by Casey B. Gibson)
Earlier in the day, the 127.4-kilometer juniors men's road race showed some promise for the U.S. squad, but the team was snake bit and got caught up in a couple of crashes in the latter part of the race. Tuesday's silver medalist in the time trial, Adrien Costa (Los Altos, Calif./Hagens Berman U23), animated the race toward the end of the third lap as he broke away with Kazakhstan's Grigoriy Shtein.  As Shtein tired, Costa decided to go it alone at the front, opening up a gap of 24 seconds on a chase group with three laps to go.

"I wasn't feeling great at the beginning of the race," said Costa. "I think I still had some of the TT in the legs, so instead of just suffering in the pack without doing much I decided to try and move off the front, take some pressure off the team, and try to set something up later on for the other guys. I found myself with a guy from Kazakhstan and we kind of rolled it. He was kind of struggling so I ended up dropping him and I was by myself for a while."

The American squad encountered a string of bad luck for the remainder of the race, getting caught up behind fallen riders just as the pace picked up at the head of the race.

"Once I was back in the pack I wanted to rest a little bit," Costa added. "Then I hit it up the hill again to try and split up the race but unfortunately going over the big climb I got caught up in a crash with Will (Barta) and Jack (Maddux) and Jonny (Brown). We tried to chase back on but couldn't. Through the start/finish line I saw we were already a minute back, so that was kind of it."

In the end, it was Philip O'Donnell (Suwanee, Ga./Hot Tubes Development Cycling Team, Inc.) and Zeke Mostov (San Francisco, Calif./Hagens Berman U23) posting the top placements for the U.S. juniors as they crossed the line in 50th and 52nd place, respectively, 1:44 behind the winning time of Germany's Jonas  Bokeloh. Alexandr Kulikovskiy of Russia took the silver medal with Peter Lenderink of the Netherlands claiming the bronze.