Madison, Wis.(May 8, 2010) – Racing continued at the USA Cycling Collegiate Road National Championships on Saturday in the form of a criterium around the Wisconsin State Capitol Building. Midwestern State University moved up in the team omnium standings after snagging both of the DI omnium titles, while powerful riders from Mesa State and Dartmouth continued success with DII titles. After two of three days of competition traditional powerhouses Lees-McRae and Whitman College hold on to tight leads heading into tomorrow’s team time trial. 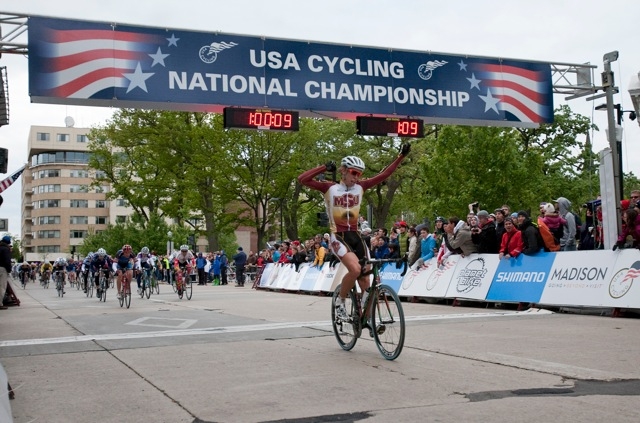 The DII women’s criterium started things off nearly the same way things were left yesterday with Arielle Filiberti (Worcester, Mass./Dartmouth College) and Kendi Thomas (Walla Walla, Wash./Whitman College) fninishing one-two and Rita Klofta (Greencastle, Ind./Depauw) moving up into third. The trio quickly jumped off the front and held a significant lead on the field. After gaining a gap of around 45 seconds on the one-kilometer course, the ladies made the conscious decision not to lap and re-join the field. As in Friday’s road race it was Filiberti who earned the national title, this time outsprinting her breakaway partners by only tenths of a second. A little more than half a minute later Martha Buckley (Cambridge, Mass./Massachusetts Institute of Technology) won the bunch sprint for fourth to add to her omnium score.
“When we started getting time gaps at around 30 seconds, I figured we were out of sight, out of mind,” said Filiberti. “I think Kendi was the one who attacked coming up the final hill, so I sat on her wheel and took the inside line because I figured that would be fastest. I think I came out of it with a little gap and drilled it from there.”
With nearly all 86 starters charging the line to the finish, the 45-minute DI women’s criterium played out in dramatically different fashion. With several major players looking to control the race and earn valuable team omnium points, things stayed all together until the final corner. Jennifer Purcell (Wichita Falls, Texas/Midwestern State University) led the pack out of that final turn and held off multi-time national champion Carla Swart (Banner Elk, N.C./Lees-McRae) to earn her first national title in dramatic fashion.
“This has been my goal for almost a year. It unfolded exactly the way my coach and I discussed,” explained Purcell, a senior radiology major. “I knew I had to be first out of that last corner as the sprint is so short. This is really the first time I’ve made cycling a top priority in my life and it paid off.”
After finishing third yesterday in the road race following an exhausting bridge up to the leaders, DII men’s criterium winner Richard Geng (Grand Junction, Colo./Mesa State) earned his stars-and-stripes today. Multiple attacks animated the 60-minute DII men’s contest, but powerful team tactics saw nearly every attempt covered almost immediately. Pat Lemieux (Mankato, Minn./Minnesota State University-Mankato) and Joe Lewis (Denver, Colo./University of Denver) earned second and third in the bunch sprint finish.
Following Purcell’s earlier victory, Josh Carter (Wichita Falls, Texas/Midwestern State University) completed his school’s sweep of the DI criterium contests at this year’s USA Cycling Collegiate Road National Championships. After numerous attacks were launched and countered by the likes of UC-Davis, University of Colorado-Boulder, Lindenwood University, Colorado State and more, it was a late-race break by riders from Michigan State and Marian University with that caught everyone’s attention. With four laps to go Max Korus (Elkins Park, Pa./University of Pennsylvania) gave chase with riders from the University of Washington not far behind. The break was caught at around three laps to go with Eric Thompson (Banner Elk, N.C./Lees-McRae College) immediately attacking and staying away until the final 300 meters. In the bunch sprint to the finish, Carter gained two bike lengths from the final corner to take the win. Robert Bush (Louisville, Ky./Marian College) and Matthew Brandt (Sheboygan, Wis./Lindenwood University) were second and third to the line.
“After Jen won the women’s race, to win this one is amazing,” said Carter.
With both individual events complete the individual omnium national titles were awarded at the USA Cycling Collegiate Road National Championships banquet at the Monona Terrace on Saturday night. Robert Bush of Marian College and road race champion Swart also took away national titles in the Division I individual omnium, or best all-around rider, category. Filliberti and Geng took home that honor for Division II. For complete individual omnium results,click here. The top women's omnium finishers will once again be invited to be a part of the Fiber One Collegiate All-Stars, a composite squad who will compete on the Natlonal Racing Calendar's Nature Valley Grand Prix in June.
Racing will conclude on Sunday afternoon with the men’s and women’s team time trial which will start and finish at the Trek headquarters in Waterloo, Wisc. Racing will begin at 9:30 a.m. Click here for a complete schedule.
For complete information regarding the event, visit the website, here.
* Tweet and follow the event on Twitter using the hashtag #colnats.