Madison, Wis.(May 7, 2010) – The nation’s best collegiate cyclists travelled to Madison, Wisconsin on Friday to contest a portion of the proposed 2016 Olympic road race course on the opening day of the 2010 USA Cycling Road Cycling National Championships. More than 350 riders braved the brutally wet and cold conditions – and over 6,000-feet of climbing around the course at Blue Mound State Park, 30 miles west of Madison. 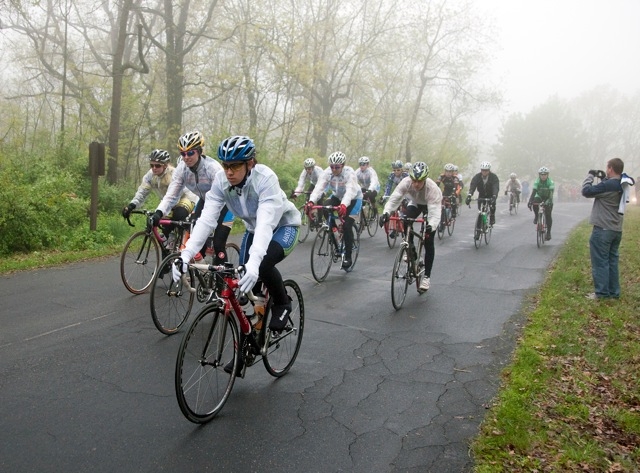 Cal Poly was the story of the morning’s men’s Division I contest, taking first and third in surprising fashion. There were no surprised in the DI women’s race however as Carla Swart (Banner Elk, N.C./Lees-McRae College) took her third consecutive USA Cycling Collegiate Road National Championship. The DII men’s race provided one of the most exciting races of the day with a strong group staying away to the finish, while Dartmouth and MIT set the stage for another tight omnium contest after dominating the DII women’s race.
After more than 70 miles and 8,000 feet of grueling climbing, Blake Anton (San Luis Obispo, Calif./Cal Polytechnic-San Luis) grabbed the DI men’s title over Adam Wisseman (Fort Collins, Colo./Colorado State University) and teammate Menso de Jong (Cupertino, Calif./California Polytechnic-San Luis). A strong chase group of around five riders including Adam Leibovitz of Marian College, Jeremy Durrin of UMass and Will Nowak of Northwestern got away and maintained a slim lead much of the five lap race, but the massive peloton reeled them back in with half a lap to go. The contest then blew apart up the final climb with some of the nation’s top climbers proving themselves on the road up to the finish. A dramatic near-photo finish ensued with Anton coming away with the narrow win.
“Our teammate was patrolling for us, so we got to sit in for a while,” said de Jong. “On the second to last climb Blake just started time trialing and everyone just kind of sat up – and it worked.”
While Swart grabbed yet another collegiate national title, it did not come easily in the DI women’s race. A group of 10 strong leaders emerged following the first big climb near the end of the first of four loops for the ladies. The group dwindled each time through leaving seven riders representing University of Colorado-Boulder, UCLA, UC-Davis, Lees-McRae and Marian University, left in contention. Rachel Warner (Luray, Va./Lees-McRae) continued to mount attack after attack on the final lap, but just when it appeared that she might get away, the aggressive rider suffered an untimely flat. Despite a push by UC-Davis, Warner and teammate Swart were able to catch back on at the base of the climb. Swart, Courtney O'Donnell (El Segundo, Calif./UCLA) and Sinead Miller (Pittsburgh, Pa./Marian College) were then able to separate themselves up the hill, with Swart pulling away for the 30 second victory.
“There was no real attack,” explained Miller. “We just pushed up the hill and whoever was stronger was going to win.”