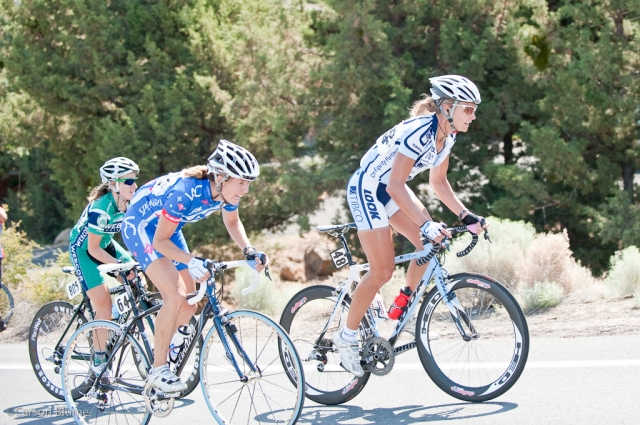 The 122-rider junior men’s field was the first to toe the line on Thursday. The group left the start bright and early for four laps of the 27-kilometer course in morning temperatures which were much cooler than they were in Wednesday’s 100-degree U23 contest. Although the field stayed together for the most part, a lead group was able to gain a minute and 20 seconds on the rest of the pack by the time they entered the final lap. Max Durtschi was in that group, and in the final kilometer he made the winning attack to solo over the finish line for the national title. Nathan Wilson (Arlington, Va./Kelly Benefits Strategies) beat out Steven Black (Vienna, Va./National Capital Velo Club) in the sprint for the silver medal, and Ty Magner (Griffin, Ga./Hincapie) and Kit Recca (Golden, Colo./Front Rangers Cycling Club) were the fourth- and fifth-place finishers.

Fifteen minutes after the juniors went off, 87 elite and U23 women lined up for a combined race consisting of the same four laps. Amber Rais (Reno, Nev./Team TIBCO) attacked in the first lap and built a lead of a minute and a half over the field, but by the time the ladies reached their fourth and final lap, an organized chase had reeled her back in. It was the second breakaway, initiated by Kori Seehafer (Louisville, Colo./Team Type 1), that proved to be the decisive move of the day. Meredith Miller found herself in that break and then in a lead group of five going into the final climb.

“I punched it just a little bit over the top to see if we could drop Kori because I thought she’d be the fastest rider at the finish,” Miller explained after winning the race.

Seehafer fought her way back though. With approximately two kilometers left, Miller decided to go for it and she held off Christin Ruiter (Bend, Ore./Value Added Capital) and Kristen LaSasso (La Canada, Calif./Mellow Mushroom) who sprinted in for the silver and bronze medals.

“Going over the last little rise before the descent to the roundabout, I just put in an attack and put my head down and took it all the way to the line,” the winner said after taking her very first national title.

Amy Dombroski (Boulder, Colo./Webcor Builders Cycling Team) was also in that group of five who took over the race in the last lap. She crossed the line in fourth place for a step on the elite women’s podium, and for the national title in the U23 women’s contest.

“A goal of mine was to take the U23 jersey for sure but I’ve been racing at an elite level this whole year and last year, so the elite jersey is definitely a goal of mine too. But I guess you have to take one thing at a time,” Dombroski explained after winning the U23 crown and proving herself to be a serious contender for an elite national title.

After starting the winning break, Seehafer crossed the finish line for the fifth spot on the elite women’s podium.

Following the women’s event, a seasoned group of elite men capped off the road race portion of the national championships. A late afternoon cloud cover provided a bit of relief from the heat as the men set out for a total of 162 kilometers.

As the leaders came down the final descent and rode into the finishing straight, about eight riders were in contention to take the crown. An all-out battle ensued and it was Olheiser who sprinted in the strongest, claiming the Stars-and-Stripes jersey about a second faster than David Clinger and Erik Slack who took the silver and bronze medals. Peter Horn and Matthew Busche then rounded out the elite men’s podium in fourth and fifth.

With Olheiser’s victory, the road racing portion of the 2009 USA Cycling Junior, U23, Elite, and Paralympic Road National Championshjps entered the books. Riders in all categories, including Paralympic athletes, will race the clock on Friday for national titles in the time trial.

Stay tuned to www.usacycling.org for full coverage of the action.