Bend, Ore. (July 29, 2009) – National championship racing continued in Bend, Ore. on Wednesday as the U23 men and the oldest group of junior women contested their road races. Alex Howes (Boulder, Colo./Felt/Holowesko Partners) was the man of the day as he sprinted to a national title in the U23 event after162 kilometers of racing in temperatures that reached 100 degrees by late afternoon. In the junior women’s contest, Coryn Rivera (Tustin, Calif./Proman Hit Squad) rode off with her 24th national title. 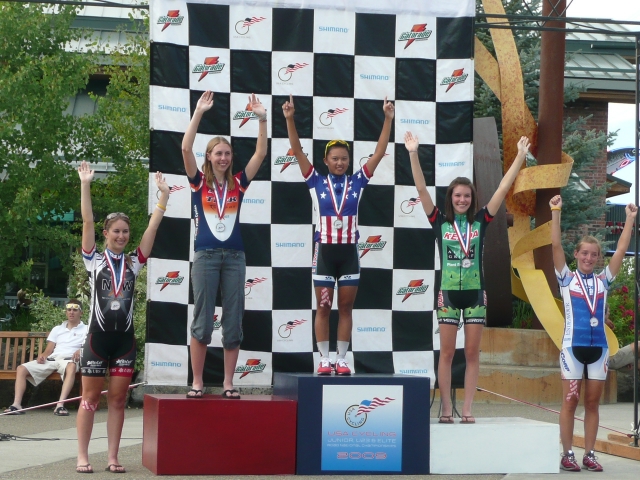 Eighteen junior women toed the line Wednesday morning to kick off the day’s events with three laps of a 27-kilometer loop. Rivera went off the front early with Jessica Prinner (South Elgin, Ill./Abd Cycling Team) and Jacqueline Kurth (Palm City, Fla./Team Kenda Tire) and the trio entered the final climb with a 30 second gap. With three kilometers to go, Rivera attacked and soloed back into the start/finish to claim her 24th career junior national title.

“It was a long hot day and it’s really hard to go out that early,” the southern California rider said after her win, “ But I’ve been in this heat all year, since December almost, so I’m pretty used to this stuff.”

Rivera rode her way into her latest Stars-and-Stripes jersey just days before she heads to Moscow to represent the U.S. at the 2009 UCI Junior Road and Track World Championships.

About a minute behind Rivera, Prinner and Kurth sprinted to the line for the silver and bronze medals. Kendall Ryan (Ventura, Calif./VRC Now) and Kaitlin Antonneau (Racine, Wis./Nova/ISCorp) rounded out the podium in fourth and fifth respectively.

With the sun directly overhead, the U23 men lined up after the junior women for their turn on the road course, and after a brutal 162 kilometers, Alex Howes won the four-man sprint for the Stars-and-Stripes jersey.

The selective course took its toll on the 119 riders in the field, causing race officials to cut the contest to six laps of the 27-kilometer loop instead of the seven that were originally planned.  As the lead riders got the bell that signified that sixth lap, King attacked and it was only Howes, Stewart, and Salon that could match the pace. The final lap saw several attacks and counter attacks among the four riders on the climbs, but they regrouped on the final descent into the start/finish area and gave the crowd an exciting sprint finish which Howes won.

“I was cramping pretty hard and they brought me back,” the new national champ said of his final attack before the sprint. “I was shaking in my boots at the end there.”

After that final attack, Howes lead the sprint from a long way out.

“I was pretty scared, but there was a national championship on the line, so I wasn’t going to let anyone come around me,” he added.

Stewart was the second to cross the line for the silver medal while King picked up the bronze and Salon got fourth place. Stetina came across next to grab that final spot on the podium.

The road racing portion of the USA Cycling Junior, U23, Elite, and Paralympic Road National Championships wraps up on Thursday as the oldest group of junior men, the elite and U23 women, and the elite men’s fields take to the road course.

Stay tuned to www.usacycling.org for full coverage of the action.