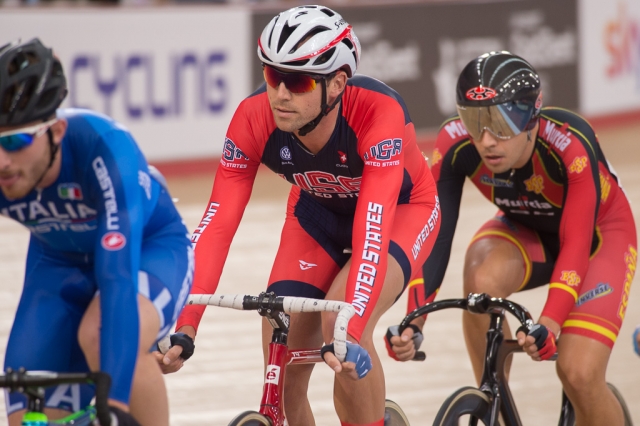 In men's omnium competition, Bobby Lea won the scratch race and earned second in the individual pursuit on Saturday. (photo by Guy Swarbrick)

Lea stands third overall in the men’s omnium after winning the scratch race, earning second in the individual pursuit with a time of 4:26.082, and 14th in the elimination race. His 92 points trail Fernando Gaviria Rendon of Colombia, who amassed 110 points, and Ecuador’s Thomas Boudat, who collected 96.

Valente stands 10th in the women’s omnium thanks to a third-place individual pursuit time of 3:37.417, an eighth-place scratch race and a 23rd-place effort in the elimination race. Laura Trott of Great Britain leads the field with 118 points, followed by the Netherlands’ Kirsten Wild with 116 points and Australia’s Isabella King with 98.

In the first round of the men's keirin, Matt Baranoski (Perkasie, Pa./Custom Velo) finished fourth in the fourth heat, just 0.258 seconds off the lead. He survived the repechage heat and moved on to the second round, where he took 11th overall. Stefan Botticher of Germany took the top prize, followed by Colombia’s Fabian Hernando Puerta Zapata, who crossed 0.039 seconds later, and Christos Volikakis of Greece, who finished 0.099 seconds off the lead.

In the women's sprint, Mandy Marquardt (Allentown, Pa./Team Novo Nordisk) posted an 11.896-second run, which was the 35th-best time of the qualifier. German Kristina Vogel bested Anastasiia Voinova of Russia for the gold, while Elis Ligtlee of the Netherlands picked up bronze.

Action concludes on Sunday as men’s and women’s omnium, men’s sprint and women’s keirin winners will be crowned to close out the second of three legs of the 2014-15 UCI Track Cycling World Cup.