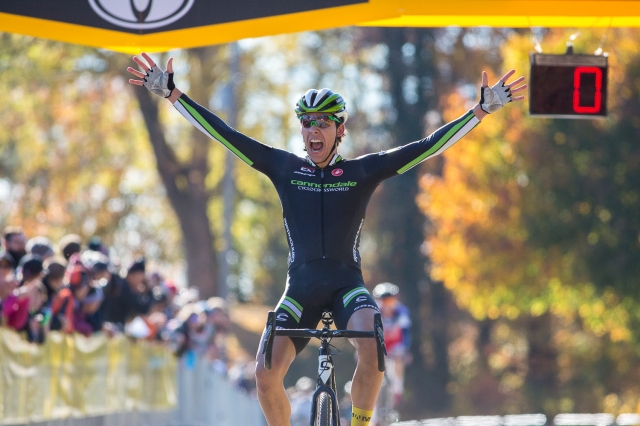 The elite men’s race was a UCI-C2 event, where Jamie Driscoll (Park City, Utah/Raleigh-Clement) rocketed through the daunting descent deemed “The Pan Am Plunge” to take the win.

In the day’s first Pan American Championship race, a very excited and smiling Rochette claimed the top step of the podium for the youth women following her 33:51 run, besting Allison Arensman (Rutherford College, N.C./K-Edge-Felt) in 35:10 and Laurel Rathbun (Monument, Colo./Raleigh-Clement) in 35:38.

The last few laps of the U23 men’s contest were nerve wracking with White and Logan Owen (Bremerton, Wash./California Giant-Specialized) duking it out and marking each other until nearly the last corner. Inciting a roar from the crowd, White attacked hard on the final descent and passed Owen with a head of steam through the penultimate corner. Owen tried to return the favor but came up short when the grass U-turned onto the finishing pavement, yielding a win for White in 49:32, followed closely by Owen in 49:38. Andrew Dillman (Fairdale, Ky./Cyclocross Network Racing) claimed third in 50:00.

In the women’s elite event, Compton overcame two previous days of mechanical trouble to claim the first ever women’s elite Pan American Championship title in 39:31. Meredith Miller (Boulder, Colo./Noosa CX), who placed second in 39:46, tweeted after the race, “Wow, that was an insanely hard race. It was technical and punchy and awesome. Very stoked to have finished 2nd in the inaugural CX Pan Ams!” Georgia Gould (Fort Collins, Colo./LUNA Pro Team) added, “Ok today’s continental champs course at @Cincy3CX might be best cx course ever!! Excited to finish 3rd,” following her bronze medal-winning time of 39:47.

The final event of Toyota Cincy3 CX Festival was the elite men’s C2 event. While Day 1 winner Danny Summerhill (Centennial, Colo./K-Edge-Felt) made an early showing along with Zach MacDonald (Bainbridge Island, Wash./KCCX) and Tim Johnson (Topsfield, Mass./Cannondale p/b Cyclocrossworld.com), it was the Raleigh-Clement duo of Driscoll and Ben Berden (Boulder, Colo./Raleigh-Clement) who pulled away mid race. After riding flawless corners the night before at KingsCX, MacDonald bobbled on one of the many tricky off camber sections and found himself off the bike and in the tape, while Johnson pulled out due to an apparent wreck. Summerhill was last man standing with Berden and Driscoll until he suffered a flat. With a sizeable gap, Berden led into the steep run-up and Driscoll buried it from there for the C2 win in 1:02:22. Berden finished second in 1:02:35 and Cameron Dodge (Huntington Valley, Pa./Pure Energy-Scott Bicycles) took third in 1:03:00.

Now in its 11th year, the Toyota Cincy3 Cyclocross Festival delivered some of the most intense competition on the ProCX calendar this year: three days, three different venues, $35,000 in prize money, UCI points up for grabs and equal payouts. The ZIPP OVCX Series, including the MudFund Derby City Cup and Cincy3 UCI weekends, will continue its focus on maximizing the growth of regional cyclo-cross through great courses, competitive fields and good times. Find the complete schedule and registration links online at ovcx.com. Like OVCX on Facebook and follow OhioValleyCX on Twitter. For more information visit, www.CincinnatiCyclocross.com.

The Toyota Cincy3 Cyclocross Festival contributed to this article.