Boulder, Colo. (Jan. 12, 2014) -- An estimated crowd of 6,000 converged on Valmont Bike Park in Boulder to watch the final day of the 2014 USA Cycling Cyclo-cross National Championships. Those in attendance and those watching the live stream online witnessed two champions at the top of their game. Katie Compton (Colorado Springs, Colo./Trek Cyclocross Collective) rode away to her 10th straight national championship, while Jeremy Powers (Easthampton, Mass./Rapha-Focus) also made it look easy in notching his second career national title. 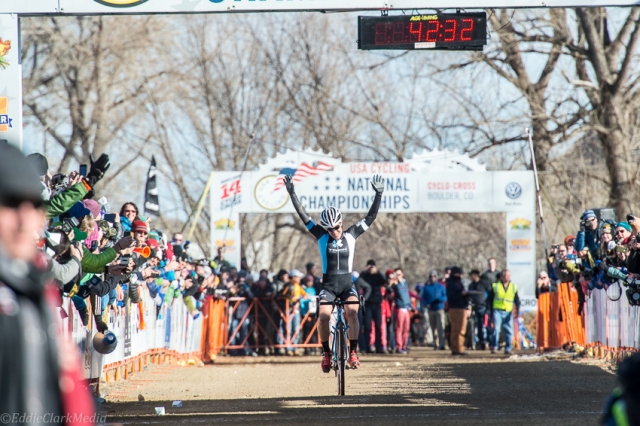 "Today felt really good," Compton said. "I think they're getting harder every year because I think the pressure grows a little bit and everyone is getting stronger. It's good. It felt really good to win today."

Compton felt her tire was leaking at the start, so she took a new tire in the pit during her first lap allowing Anderson to open a lead. With her tire pressure solved, Compton caught Anderson on the lower half of the course and opened a four-second lead as they turned into the second lap. That lead continued to grow through the race as the field was forced to race for second place.

Crystal Anthony (Beverly, Mass./Team Optum p/b Kelly Benefit Strategies) and Miller dueled for the bronze medal for the final three laps. A slow start landed Miller 10 seconds behind Anthony after two laps, but Miller overcame the deficit as she steadily reeled Anthony back.

"They're all really hard to win," Compton said of her 10 jerseys. "I love them all. Every course is different. Every year is different. I think the first one is still my favorite because it was such a surprise. I wasn't expecting that. It was a really good ride for me so I think that one is my favorite." 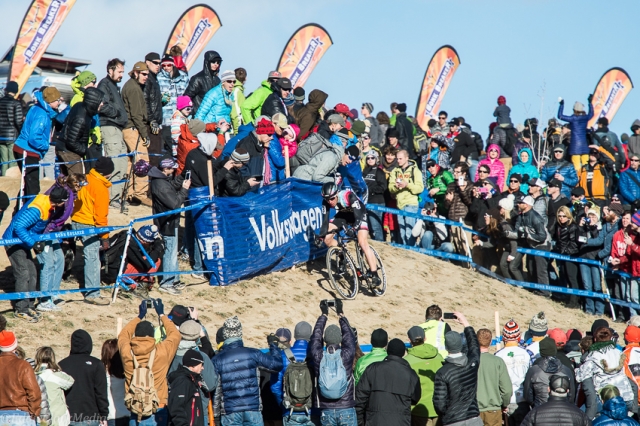 Jeremy Powers maneuvers down Pete's Plunge. (photo by Eddie Clark)
Similar to Compton's race, Powers left no doubt that he was the strongest rider today, taking the holeshot off the start and then steadily increasing his lead with each of his eight  circuits of the Valmont course. His third lap was turned in a blistering 7:16. Ryan Trebon (Bend, Ore./Cannondale p/b Cyclocrossworld.com) was the only rider able to produce some sort of a challenge to Powers on Sunday but he was never able to bring back the champion.

Powers broke the line with a winning time of 59:16 to reclaim the title he won in 2012, but lost last year to Jonathan Page (Northfield, N.H./Fuji-Spyoptics). Trebon rolled across 43 seconds back to claim the silver medal, while Tim Johnson (Topsfield, Mass./Cannondale p/b Cyclocrossworld.com) separated himself from an early group of chasers to easily win the bronze medal, 1:36 back of Powers.

"Obviously it is a privilege to win my second national title and to do it in a place like Boulder with so many people out watching," Powers said. "It was a perfect day on the bike for me. It all came together so perfectly, from the bike to the tire pressure to the amount of clothing I was wearing. That's what you need to be national champion and I feel really lucky and really happy."

Kaitlin Antonneau (Colorado Springs, Colo./Cannondale p/b Cyclocrossworld.com) successfully defended her U23 national championship by being the top U23 rider in the elite women's race. Antonneau finished the race in 44:42, which placed seventh among all elite women, to pace the U23 riders. Ellen Noble (Kennebunkport, Maine/Trek Cyclocross Collective) finished her race 1:44 behind Antonneau to claim second place among the U23 women. Hannah Finchamp (Altadena, Calif./Team LUNA Chix) earned the bronze medal after crossing the line 2:23 behind Antonneau.

In the juniors men's 17-18 race, both Peter Goguen (Hopedale, Mass./Race CF) and Boulder's own Maxx Chance (Boulder, Colo./Clif Bar Development Cross Team) put on a show as they quickly distanced themselves from the rest of the field. Goguen, third in this race a year ago, went out early with Chance and built up an early 15-second advantage on Chance who was wowing the crowd every lap by riding up the Belgian Stairs on the backside of the course. Despite Chance's efforts, Goguen methodically extended his lead with every lap and pulled away for a 48-second advantage, crossing the line in 40:13. Chance held off a hard-charging Austin Vincent (Simsbury, Conn./Race CF) for a second-place finish, with Vincent coming in 59 seconds behind the winner.

"Right in the middle, around two laps in, I knew I had a decent gap and started to back off and take it easy and make sure I didn't go down in any corners and just sustain the power until the end," said Goguen. "

Kerry Werner (Banner Elk, N.C./Lees-McRae College) successfully defending his title as the Division I men's national champion after he completed his six-lap race in 47:26. Werner, who would go on to finish 11th in the elite men's race later in the day, started strong and coasted to victory. Andrew Dillman (Fairdale, Ky./Marian University) finished 39 seconds behind Werner in second place. Kevin Fish (Austin, Texas/University of Texas at Austin) edged Alexander Martin (Madison, Wis./University of Wisconsin-Madison) in a two-rider sprint for third place. Fish and Martin each finished 1:03 behind Werner. Brandon Feehery (Homewood, Ill./Lindenwood University) claimed the last spot on the podium when he edged Joshua Johnson (Fort Wayne, Ind./Marian University) in a sprint for fifth place. Feehery crossed the finish line 1:45 behind Werner.

Werner, who won this national title for third time today, turned five of his six laps in under eight minutes. With a secure lead, Werner rode his last lap cautiously and finished it in 8:02.

"I wanted to put the pressure on early," Werner said. "I figured if I did that, I would be able to ride my own race. I really didn't want to sit in and let the other guys battle it out because something technical could have happened. I didn't want to leave it up to chance."

Brevard College's Lewis Gaffney (Angel Fire, N.M./Brevard College) took full advantage of the opportunity he was afforded when race leader Nathaniel Morse (Cohasset, Mass./Furman University) suffered a mechanical on the race's second lap. Gaffney took over the lead at the bottom of the off-camber section and never relinquished it, crossing the line in 49:37, 30 seconds ahead of Middlebury College's Samuel O'Keefe (Baltimore, Md./Middlebury College). The bronze medal went to East Tennessee State University's Joseph Welsh (Cordova, Tenn./East Tennessee State University) who was 1:06 back of Gaffney.

"When Nate (Morse) was up there with me I was doing everything I could to evaluate where I was getting time on him or losing time on him," Gaffney said. "It was going to be a very, very tactical race. It was a bummer to see him have a mechanical, but that happens. From there on it was just conserve and try to do the best I could to relax not put too much pressure on myself. This course is amazing. It's just super fast and flowy. If you take your focus off of it for one second it could end in disaster. Even with a big lead I had to keep focused and relaxed and not worry about the race behind me, just worry about my own."