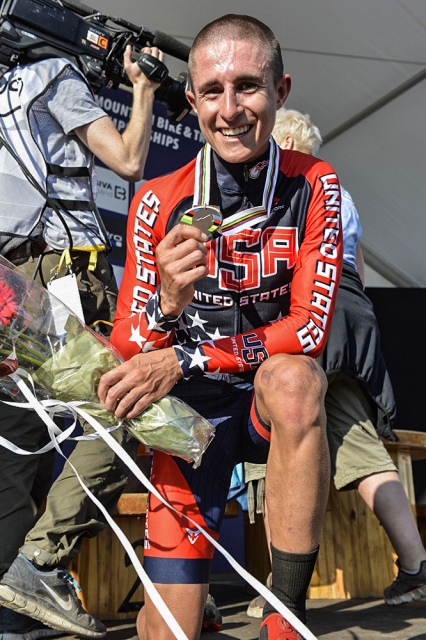 From a tough 38th position in the first lap, Grotts steadily moved his way up to medal contention thanks to his good, consistent lap times. With about half a lap to go, he was only 22 seconds out of third place and on the final climb was able to take over third from Dutch rider Milan Vader.

"My start was way less than ideal," Grotts explained at the finish line. "But I had a super steady race and was picking people off on the climbs mainly, and just keeping it in control on the descents. And then on the last lap I was riding for fifth and got a gap. Then I saw fourth and passed him. Then once you see third, you can't give up and I ended up making it happen. This is awesome for me, for the United States."

Courtney finished just 7.24 off the winning pace for a solid 13th-place as the top American. She was followed by Powless in 19th and Blevins in 37th. The women's event was won by Jolanda Neff (SUI) while Margot Moschetti (FRA) and Linda Indergand (SUI) grabbed the silver and bronze medals.

Eleven more Americans will be in action on Saturday as the elite men's and women's cross-country races take center stage. Catch Saturday's races live via Universal Sports or Red Bull TV, or follow #MTBWorldChamps on twitter.