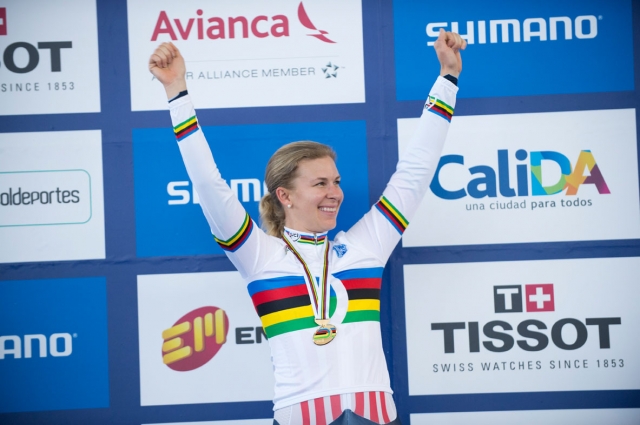 Sarah Hammer salutes the crowd after donning the rainbow jersey for winning the women's omnium at the 2014 UCI Track Cycling World Championships in Cali, Colombia. (photo by Casey B. Gibson)
Cali, Colombia (March 2, 2014) -- Sarah Hammer (Colorado Springs, Colo./TWENTY16 Pro Cycling) won her seventh world championship gold medal and made it back-to-back world titles in the women's omnium on Sunday at the 2014 UCI Track World Championships in Cali, Colombia. Hammer won three of the six events outright over the two days of omnium competition to earn her second rainbow jersey in the omnium. She won her first omnium title last year after winning a silver medal in 2011 and a bronze medal in 2012. Hammer also captured a silver medal on Friday in the individual pursuit, an event she owns five world championship titles in.

"It's amazing to be able to replicate last year," said Hammer. "Anytime you're a world champion you have a huge target on your back. Everybody's lifted their game, especially Laura Trott (GBR). She kept pressure on me the whole time. I had to bring my 'A game' in everything. I knew I was physically prepared, but the omnium is a battle of the mind and the body, so you have to have great execution on every single event, and I feel like I had success at that the last two days."

The women's omnium got underway on Saturday where Hammer placed second in the flying lap with a time of 14.165, then won both the points race and elimination race. On Sunday she came out strong once again by winning the individual pursuit in a time of 3:32.761. Hammer followed that up with a fifth-place finish in the scratch race and then secured the world championship title with the fourth-fastest time in the time trial.

Hammer admitted that Friday's loss in the individual pursuit final affected her.

"I wanted to win," Hammer said. "I was super upset and had a rough night afterwards. I kept telling myself 'let it go' but I'm really competitive and it was great motivation for me, especially coming into today. I wanted to make sure I was standing on the top of the podium today."

In the end, Hammer totaled 14 points to defeat her closest competitor, Trott, who had 20 points. Collecting the bronze medal with 24 points was Annette Edmondson of Australia. Hammer enjoyed a six-point lead after the first day of competition.

"The second day always starts out good for me because I start with the individual pursuit," added Hammer. "What I'm most proud of this whole championships is my 500 (time trial). That was a huge personal best for me. It just shows all the hard work I've been putting in is paying off."