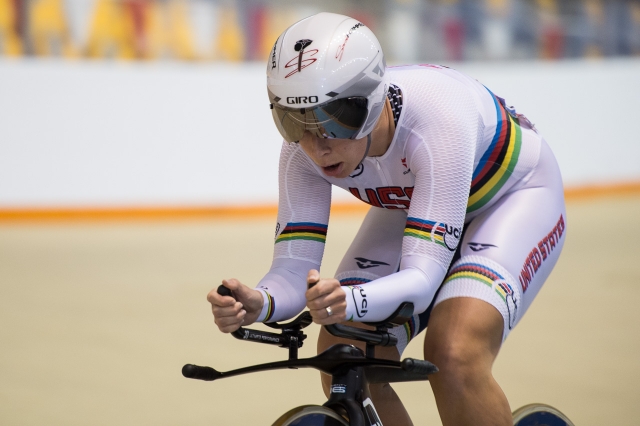 Hammer dons the rainbow stripes of a world champion as she rides to victory in the omnium pursuit. Photo by Guy Swarbrick.
Guadalajara, Mexico (November 7, 2014) – The 2014-2015 UCI Track World Cup got underway this weekend with stop number one in Guadalajara. Sarah Hammer (Temecula, Calif./Performance United – FELT) and Bobby Lea (Mertztown, Pa./Custom Velo) made Team USA fans proud on Saturday, each winning their respective omnium pursuits.

In the women's competition, Hammer rode at an average speed of 51.152 kilometers per hour to post a 3:31.132 over the three kilometers and beat out second-place pursuiter Kirsten Wild (NED). Hammer was also fifth in the omnium scratch race and 15th in the omnium elimination race on Saturday.

The men's event saw Lea complete the four-kilometer omnium pursuit in a time of 4:16.715 to best second place rider Lucas Liss (GER). The American was also tenth in the scratch race and sixth in the elimination race on Saturday.

The men's and women's omnium competitions will wrap up on Sunday with time trials, flying laps, and points races. 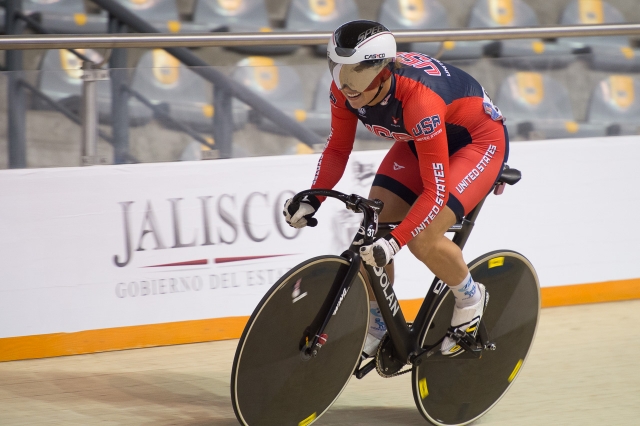 Bobby Lea won the men's omnium pursuit. Photo by Guy Swarbrick
In other American action on Saturday, Matt Baranoski (Perkasie, Pa./Custom Velo) competed in the men's keirin and was eliminated after placing second in his first round repechage.  Additionally, Mandy Marquardt (Allentown, Pa./Team Novo Nordisk), who qualified in 24th for the women's sprint, was eliminated in the first round by eventual fourth-place rider Ells Ligtlee (NED).

Stop one of the Track World Cup will wrap up on Sunday with the remaining omnium events, the women's keirin, and men's sprint. Click here for a complete schedule with start lists. You can also WATCH THE ACTION LIVE on Sunday here: http://universalsports.com/watch-live/