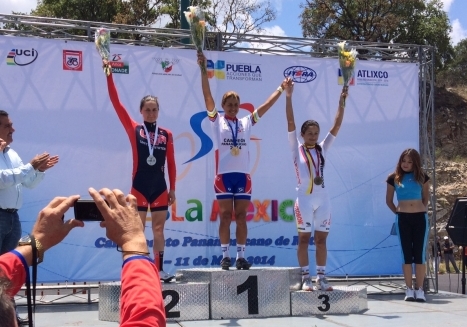 Megan Guarnier won the silver medal in the women's road race at the Pan Am Championships on May 10. (photo by Jack Seehafer)
Puebla, Mexico (May 10, 2014) -- Megan Guarnier (Mountain View, Calif./Boels-Dolmans Cycling Team) sprinted to a second-place finish in the women's road race Saturday at the 2014 Pan American Continental Road Championships in Puebla, Mexico. It was Guarnier's second medal of the event after claiming the bronze medal in Thursday's individual time trial.

Guarnier caused a split in the field just before the halfway point of the 74.9-kilometer race. That split created a breakaway of seven riders, including Guarnier. A few unsuccessful attacks were tried over the final 10 kilometers and the race came down to a six-rider sprint with Guarnier taking second behind Cuba's Arlenis Sierra. Colombia's Laura Lozano claimed the bronze medal.

The men's U23 road race on Saturday saw a Colombian sweep as Fernando Gaviria, Brayam Ramirez and Hernando Bohorquez all crossed the line with the same time. Americans Justin Mauch (San Francisco, Calif./Airgas Cycling) and Chris Putt (Park City, Utah/Bissell Development Cycling) fell off the pace set by the leaders and did not complete the race.

Full results of the men's U23 road race