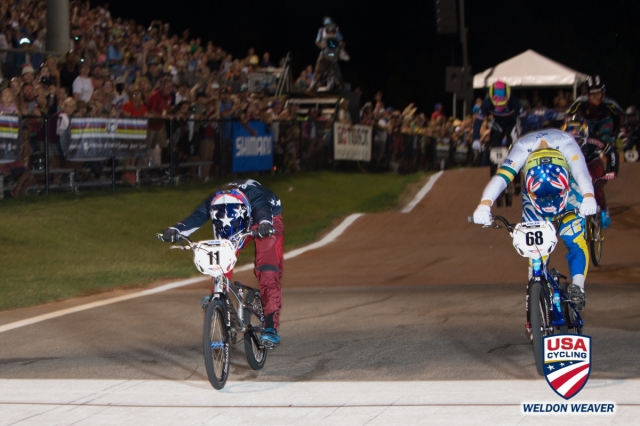 As the lone American in the women’s main, Post led right out of the gate but had to pedal hard to keep the lead. She was almost taken over in the final straight by Caroline Buchanan (AUS) as an all-out battle ensued for the gold. In a photo finish, Post took her first elite world title with Buchanan taking silver. The bronze went to Mariana Pajon (COL).

“Oh my goodness, this is amazing. I’ve been waiting a long time for this. I guess third time’s a charm,” a glowing Post said in her post-race interview. “It was close. Caroline came up at the end and I wasn’t sure but I kept pedaling. My legs were jell-o so I just lunged and went for it. There have been a lot of times I’ve been the bridesmaid and not the bride. I’m so glad to have finally gotten it.”

Sharrah, like Post, also took the lead right out of the gate in the elite men’s competition when his strong pedaling sent him straight to the front.  Andre Sylvain (FRA) spent his race making up ground but by the final straight had significantly narrowed his gap to first place. Sharrah had to work hard to hold him off but finished ahead of the Frenchman in a close, dramatic ending at the finish line. 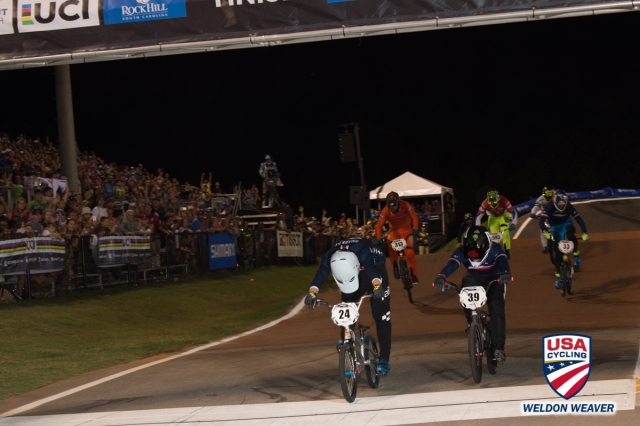 Sharrah battled to hold his lead position all the way to the line. Photo by Weldon Weaver.

“I really like this track and have always had good finishes here,” Sharrah said afterwards. “I believed a lot in myself and thought I could do it. I kept the belief and really had fun all day.”

In the junior women’s final, Sophia Forest (South Jordan, Utah) represented the red, white, and blue. She held third place almost until the end when she was overtaken and settled for fourth. In the junior men’s races, American Kamren Larson (Bakersfield, Calif.) advanced the furthest for Team USA but finished fifth in his semi-final and did not contest the main.

It was the first time in 16 years that BMX Worlds have been held on U.S. soil. Saturday’s elite races were the grand finale of an exciting week of BMX competition in Rock Hill where American athletes also brought home 52 medals in the amateur challenge class competitions.