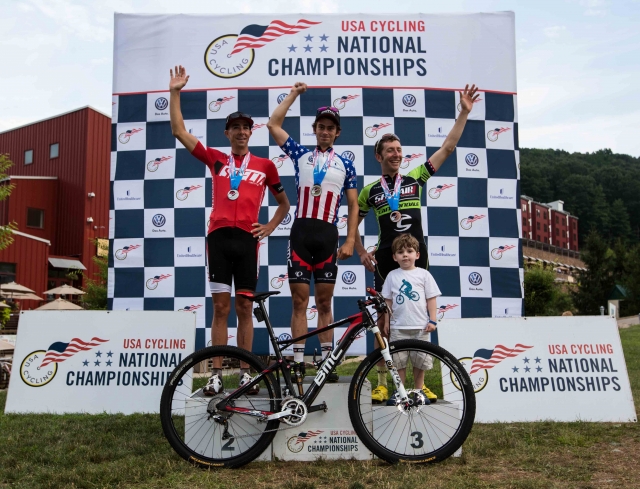 Ettinger, who won the U23 men's national championship in 2011, fell behind Todd Wells (Durango, Colo./Specialized Racing XC) and Jeremiah Bishop (Harrisonburg, Va./Team Sho-Air Cannondale) in the early stages of the men’s race. Midway through the six-lap race, Wells had built a lead of approximately 40 seconds on Bishop and Ettinger was comfortably in third place. Ettinger, who used the descents to chip away at Wells’ lead, gained nearly 40 seconds on Wells and 30 seconds on Bishop on the fourth 6.5-mile circuit as he completed it in 15:42. Ettinger gained 10 seconds on Wells and a minute on Bishop during the fifth lap. He secured his place on the top step by completing the last lap in 15:55, 48 seconds faster than Wells to win the race by 49 seconds. Bishop earned the bronze medal, finishing 2:20 behind Ettinger.

“I'm so happy right now,” Ettinger said. “Off the start, I didn't think that was going to happen. I was caught up in a little bit of a mess and was about seventh or eighth. I lost JB and Todd's wheel in the woods. I thought I was going to be racing for third the rest of the race. Maybe those guys went out a little bit hard and it was a little bit of a blessing in disguise I wasn't able to stick on their wheel. It worked out to my advantage.”

Davison quickly established herself as the strongest rider in the elite women’s field. Davison, one of the riders that represented the United States at the 2012 Olympic Games in London, completed the five-lap race in 1:35:00, 2:48 faster than silver-medalist Pua Mata (Yucaipa, Calif./Sho-Air Cannondale) and 5:22 faster than Mary McConneloug (Chilmark, Mass./Kenda-Seven-Stan’s NoTubes), who placed third.

Davison, like Ettinger, used the descents to gain time on the field and recover for upcoming technical sections. The women who would be the three top finishers and Georgia Gould (Fort Collins, Colo./LUNA Pro Team) reached the top of the descent with Davison in the lead when Gould flatted and was unable to keep up with the three women.

“We were all together,” Davison said. “It came to the descent. I was leading and I could see that I had a little gap on them. I think Pua was on my wheel. Something happened behind me and someone said, 'Someone crashed.' I just kept it smooth from there. I built a lead and extended it on the second lap. That bike was descending so well, which I think was a big advantage today because it's more recovery. You can gain a lot of time in those technical sections.” 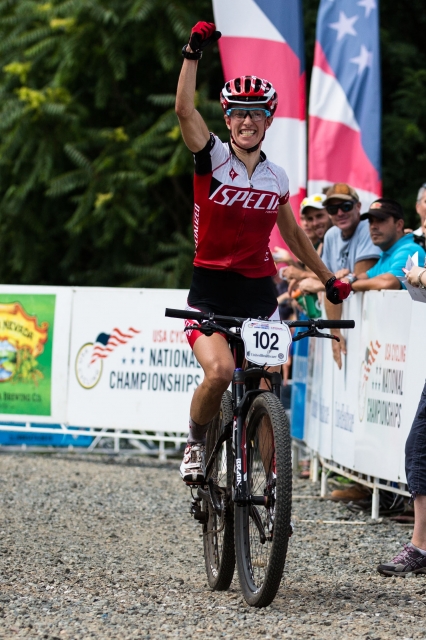 The category one men’s races began at 8 a.m. and were greeted with comfortable temperatures, but an overnight rain took its toll on the six-mile amateur course. The rain slicked certain sections of the course and left other parts of the course muddy.

Seamus Powell (Round Top, N.Y.) turned in an impressive performance, completing his three-lap singlespeed race in 1:59:23, 8:46 faster than his closest competitor, Ron Harding (Coatesville, Pa.). Powell was the only singlespeed racer to complete a lap of the race in less than 40 minutes. He turned in a pair of laps in under 40 minutes to bolster his national-championship ride. Gordon Wadsworth (Roanoke, Va./Charlottesville Racing Club) finished third, just five seconds behind Harding. Christopher Valenti (Valley Forge, Pa./Bikesport-PA) finished fourth and Kevin Schwartz (Skippack, Pa.) placed fifth.

Madison Matthews (Boalsburg, Pa.), whose father Jim Matthews (Boalsburg, Pa.) won the masters men’s 55-59 race on Friday, topped the senior men’s 19-24 field with a time of 2:01:46. The younger Matthews, whose plan to compete in the national championships in 2008 was scrapped by a broken collarbone, earned his first national championship in his first attempt on Saturday. Joshua McDowell (Durango, Colo./Fort Lewis College) finished 3:46 behind Matthews and 2:11 ahead of the bronze medalist, Jason Blodgett (Berlin Heights, Ohio/Spin-Litzler Automation). Brent Hall (Lakeland, Fla.) and Chris Johnson (San Marcos, Calif.) rounded out the podium, placing fourth and fifth, respectively.

“It's really tough to game plan because I didn't know any of the guys I was racing,” Matthews said. “It's hard to say what people are going to do. Obviously, I wanted to win. I would have been fine as long as the legs were there and everything checked out. I tried to ride my own race, focused on riding smooth and try not to waste too much energy in the rocks.”

Tyson Kaman (Fort Collins, Colo.) opened a 25-second cushion on the first lap and did not look back to win the masters men’s 35-39 cross-country race. Kaman finished his first lap in 41:15 on his way to winning his group’s race by 16 seconds. Stephen Rowand (Morgantown, W.Va.) surged late in the race to pressure Kaman, but was unable to track him down. Rowand earned the silver medal while Brian Shernce (Flanders, N.J./Team Bulldog) earned the bronze. Shawn Smith (Gainesville, Fla.) and Nick Sears (Quarryville, Pa.) were separated by only 13 seconds in placing fourth and fifth, respectively.

Dario Fredrick (San Anselmo, Calif./Whole Athlete-Specialized) has won each of the eight national championship races he has entered, including the last five cross-country mountain bike contests. He has supplemented that with the last three marathon mountain national championships. In Saturday’s race, Fredrick was nearly four minutes faster than the rest of the masters men’s 40-44 field to climb to the top step of the podium. Michael Yozell (Emmaus, Pa./Kapelmuur Independent) was 10 seconds faster than Eric Schofield (Richmond, Va./Bon Secours) in the race for the silver medal. Mose Howard (Wesley Chapel, Fla.) and Greg Galletta (Dobbs Ferry, N.Y.) placed fourth and fifth, respectively, in the race.

Three seconds separated the top two finishers of the masters men’s 45-49 race. Victor Sheldon (Vista, Calif.) bested Troy Kimball (Randolph, N.J./Finkraft) to ascend to the top step of the podium. The two were even after the first of the three-lap race, each completing the circuit in 42:53. Sheldon drilled it on the second lap and opened a gap on Kimball. Kimball’s last lap was 1:33 faster than Sheldon’s, but it wasn’t enough to make up the difference and Sheldon earned the national championship. David MacPherson (Riverview, Fla.) finished third, only 15 seconds faster than Craig Cozza (Presto, Pa./UPMC-Pro Bikes), who placed fourth. Michael Rowell (Bedford, Mass./Bell Lap Cycling Club-Bikeway Source) finished fifth.

Arley Kemmerer (Saylorsburg, Pa./Charm City Cycling LLC-C3-Twenty20Cycling.com) was only 33 seconds faster than Amber Markey (Monona, Wis.) to win the senior women’s 25-29 national championship. Kemmerer, who races cyclo-cross during the winter, started strong, completing the first lap 36 seconds faster than anyone in her field. Markey traversed the second lap three seconds faster than Kemmerer, but Kemmerer was able to cruise to the finish line as the winner. Callan Horwath (Nazareth, Pa.) earned the bronze medal after completing the race in 1:58:14, 2:52 behind Kemmerer. Hattie Freye (New Gloucester, Maine) placed fourth and Abbey Alexiades (Etna, N.Y.) was fifth.

“I'm so happy,” Rawlins said. “That was awesome. Really awesome. I just rode as hard as I could. The course was really tough and technical. That last mile was slippery and treacherous. I loved it. It was awesome. I was having a great time. It felt good.”

Tiffany Ballew (Atlanta, Ga./Peachtree Bikes) won the masters women’s 35-39 national championship. Ballew was the only rider in her group to complete the race in less than two hours. L. Marie Walsh (Loveland, Colo.) completed the two-lap race in 2:00:37 while Joanne Grogan (Hinesburg, Vt./Cyclocrossracing.com) beat Karen Krasley (Coplay, Pa.) by only 11 seconds in the sprint for third place. Jessica Hill (Joppa, Md.) rounded out the podium in fifth place.

The event concludes with Super D and short track cross-country racing on Sunday. The racing begins at 9 a.m. on the Super D course. The short track cross-country takes center stage in the afternoon with four races spanning 20 minutes plus three laps. The category 1 women’s race begins at 1:30 p.m. before the category 1 juniors men 15-18 is set to begin at 2:15 p.m. The penultimate race of the day features the pro women at 3 p.m. before the pro men cap the day’s racing at 3:45 p.m.

For complete details on this event, including a complete schedule, results, course maps and a photo gallery, please visit the event web site. If you can’t make it out for the event, follow all of the action on Twitter using the hashtag #MTBNats.