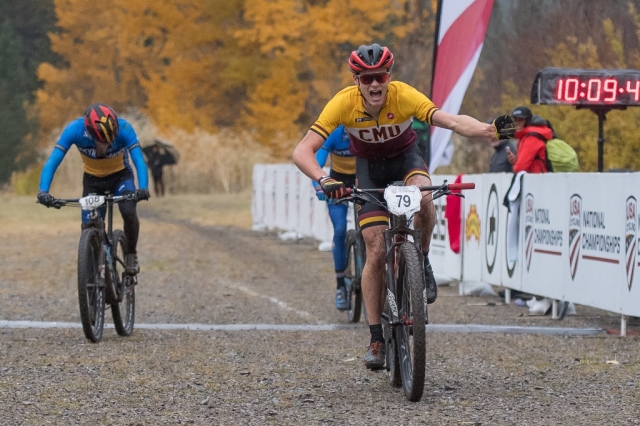 In the men’s varsity race, Liam Earl (Colorado Mesa University) turned in a huge final lap to nip Fort Lewis College teammates Henry Nadell and Cole Paton at the line. All three riders were within one second of each other.

The men’s club division title went to Cal Skilsky (Northern Arizona University) who pulled away on the final lap to win by more than 33 seconds ahead of second- and third-place finishers Nicholas Lando (University of Vermont) and Grant Ellwood (University of Colorado Boulder).

The women’s varsity division was up next and Mackenzie Myatt (Savannah College of Art and Design) took the win going away in 20:44.7. Hannah Finchamp (Lindenwood University) was next to cross the line in 22:57.8, followed by Gwendalyn Gibson (Colorado Mesa University) in third with a time of 23:32.7.

The women’s club cross country race was won by Emily Schaldach (University of Colorado Boulder) with a time of 26:08.5. Rachel Anders (Stanford University) placed second in 27:13.0 and Anika Heilweil (Middlebury College) came in third in 30:35.4.

The omnium standings for varsity and club following the cross country races can be found here.

Dual slalom and downhill finals are on tap for Saturday. Follow @USACcollegiate and #collnats on twitter for live updates!