Toscana, Italy (Sept. 29, 2013) -- The 2013 UCI Road World Championships concluded on Sunday with the 272-kilometer elite men's road race held under brutal weather conditions. Torrential rain made for slow speeds and hazardous conditions for the majority of the day and forced all but two of the seven-man U.S. team to abandon the race. In the end, only 61 of the 208 starters were able to finish the grueling course.

As the race, which started in a downpour in Lucca, entered the city of Florence for the first of ten 16-kilometer circuits, both Vuelta a Espana winner Chris Horner (San Diego, Calif./Team RadioShack Leopard Trek) and Amgen Tour of California champion Tejay van Garderen (Boulder, Colo./BMC Racing Team) hit the pavement in the slick conditions. Horner was unable to continue and van Garderen made an effort to get back in the race with the help of teammate Taylor Phinney (Boulder, Colo./BMC Racing Team), but both pulled out when they could not make contact with the main field.

"We got on to the circuit and both Horner and Tejay crashed within 100 meters of each other," said Phinney. "I sat on the side of the road and waited for Tejay to compose himself. We chased for a bit but when you have to sit on the side of the road for that long, we really never were able to make it up. I would have liked to have been able to continue but Tejay and I stick together and I was there to help him." 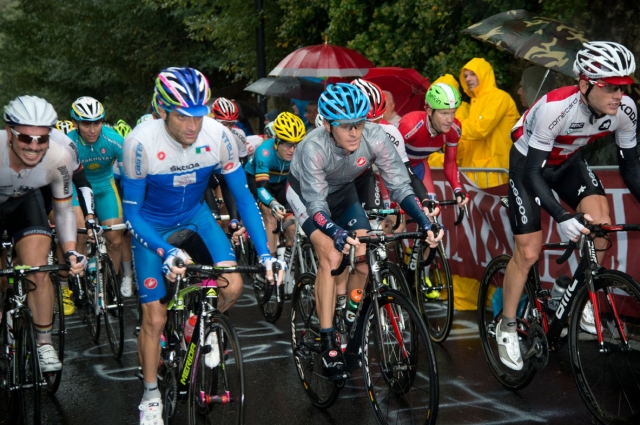 Peter Stetina stays with the main field as they summit a climb. (Photo by Casey B. Gibson)
After both Matthew Busche (Wauwatosa, Wis./RadioShack Leopard Trek) and Andrew Talansky (Napa, Calif./Garmin-Sharp) also exited on the ensuing laps, the race was left to Alex Howes (Boulder, Colo./Garmin-Sharp) and Peter Stetina (Santa Rosa, Calif/Garmin-Sharp) to contest for the American team.

Stetina moved to the front of the peloton with over three laps remaining and briefly brought the group to within 1:15 of the race leaders at that point, Poland's Bartosz Huzarski and Czech Republic's Jan Barta.

"I figured we're Americans and we have to go down blazing instead of fizzling out," said Stetina. "So I swung for it and Alex and I were able to represent as much as we could."

Stetina was also driven by thoughts of his father back home in a hospital bed in Colorado after a serious bike crash suffered during a training ride earlier in the month.

"I had a sticker on my bike to remind me of my dad so I was able to suffer for him."

Stetina and Howes were able to stay with the lead group as the race came back together in the late stages, but on the final climb of the day, four riders broke clear and pulled away toward the finish in Florence. In the end it was Portugal's Rui Costa winning a sprint finish over Spain's Joaquin Rodriguez, while Spanish countryman Alejandro Valverde successfully defended his bronze medal by beating Italy's Vincenzo Nibali to the line 15 seconds back of Costa.

Howes and Stetina came across the line with a group of riders 2:01 behind, with Howes finishing 31st and Stetina in 37th.

"I was suffering a lot because I was off the back the whole race," Stetina said. "The first four laps I was behind the field. You'd catch back on and then there was another crash, and then you'd chase for half a lap. I did a steady, hard time trial for four laps and then I kept coming back. It was just survival out there."

When asked how he found motivation to keep going in a race that difficult, Howes replied, "I don't know, but it helps having the Stars-and-Stripes on your back."