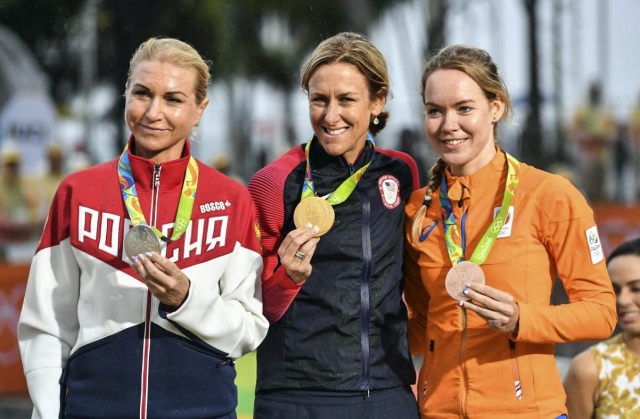 The day before her 43rd birthday, she clocked a winning time of 44:26.4 on the rainy and windy 29.7-kilometer course to beat Olga Zabelinskaya (RUS) by five seconds and bronze medalist Anna van der Breggen (NED) by 11 seconds. American Evelyn Stevens (San Francisco, Calif.) placed tenth, 1:33.66 off of Armstrong’s pace.

Armstrong, who came out of retirement a second time to go for the gold in Rio, awoke to pouring rain and wind on Wednesday morning

“I looked out the window and thought ‘oh my gosh.’ We don’t train really hard to wake up to pouring rain on the time trial bike, let alone on a technical course like this,” she said. “I had a choice at that moment to either take it and get super nervous or I could take it and say you know what, I’ve probably ridden my bike in the rain on the time trial bike more than any one out here. So I kind of tricked my mind and gave myself confidence because everyone else had to go with this.”

Armstrong went out strong and led at the first time check at the top of the Grumari climb, but by the second time check, she was 2.88 seconds behind Zabelinskaya.

The Olympic champion finished strong, gaining back the time she’d lost over the second climb and collapsed on the pavement at the finish line once her gold medal was confirmed,

“For the past 24 hours, Mara has been leaving me notes,” Armstrong said of her teammate who placed fourth in the road race on Sunday. “I found one in my coffee cup yesterday telling me I’m a champion. I found another one on my brush. There was another one on my pillow and another one on my podium bag. The support she’s turned around since her race on Sunday has been phenomenal and that is what a team is all about. I feel that we’re all genuinely happy for one another and it’s given me great pleasure to represent the team. I haven’t experienced this in all of my years.”

Armstrong’s teammate, Evelyn Stevens, told reporters afterwards how exciting it was to see her teammate win. When asked about her own time trial, she said

“I felt good. I was super well prepared. I think I hesitated in the rain which is a bummer. I just didn’t quite have my footing down in the rain so my error on that. I left it out there with my power but any time the road bended a little bit, I just hesitated.”

You can watch all of the Olympic cycling events either on TV, online, or mobile devices! Click here to learn how to watch the events. Or see the day-by-day streaming schedule here by selecting cycling from the sport drop-down menu.