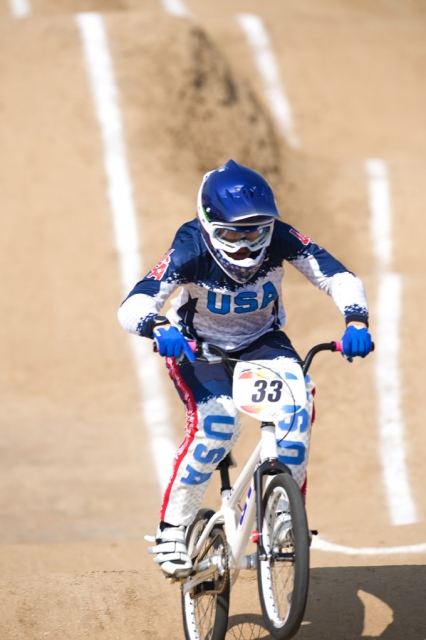 Beijing, China (August 22, 2008)—The United States collected three more medals in the sport of cycling on Friday when Americans Mike Day (Santa Clarita, Calif.), Donny Robinson (Napa, Calif.) and Jill Kintner (Seattle, Wash.) were among the first athletes to grace the podium in the newest Olympic sport of Bicycle Motocross (BMX).
Day and Robinson won the silver and bronze medals respectively in the men’s contest, while Kintner added a bronze in the women’s race. Their contributions brought the U.S. medal count in cycling events to five – the most by a U.S. Olympic Team since the 1984 Los Angeles Games.
“Incredible is how I’d describe it,” said Day after his accomplishment. “Silver medal, after 3 ½ years of training, I can’t complain. We had all the resources to make this happen and we’re excited to be here. Two men and a woman on the podium, I’m pumped.”
The American’s performance meant the U.S. squad will bring home half of the BMX medals that were up for grabs on Friday. France also won multiple medals as Ann-Caroline Chausson and Laetitia Le Corguille claimed gold and silver respectively ahead of Kintner.
After winning one medal in Seoul (1988), two in Atlanta (1992) and three in each of the last three Games in Atlanta (1996), Sydney (2000) and Athens (2004), the medal count thus far for American cyclists in Beijing is the most since Team USA captured nine in Los Angeles and the second-most in history.
“First woman for America, in the first event ever, first medal, it’s such a piece of history, said Kintner. “I’m so glad I can represent and be a part of it. Mikey and Donny and me, it’s huge for American BMX. This’ll bring a big boost to our program. It puts us on the map again.” 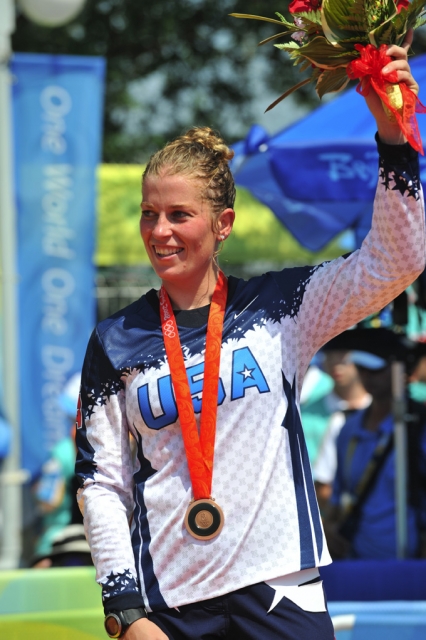 Kyle Bennett (Conroe, Texas) was the United States’ fourth competitor to advance to the semifinals despite suffering a dislocated shoulder in a quarterfinal crash two days ago. Although Bennett was in the mix for a spot in the finals, he fell just short, finishing sixth overall in his semifinal bracket.
Facing a strong women’s field that also included standouts Shanaze Reade (GBR), Sarah Walker (NZL), Gabriella Diaz (ARG), Nicole Callisto (AUS) and Sammy Cools (CAN), Kintner rode a solid final and stayed out of trouble when it mattered most. After a slow start out of the gate, Kintner kept herself in contention and avoided a final-corner crash by Reade to solidify her spot on the podium.
“People were going for broke, so I was patient,” explained Kintner. “I waited and avoided all the problems.”
In the men’s race, Day finished behind only gold medalist Maris Strombergs of Latvia.
After earning the top seed in the qualifying round and winning all three of his quarterfinal heats on Wednesday, Day entered Friday’s semifinal round looking like the man to beat. His streak continued with wins in his first two semifinal heats before a third-place finish in the last heat assured him a spot in the eight-man, winner-take-all finals. With Day lined up alongside Robinson – who qualified third in the semis – Strombergs, Andres Jimenez (ARG), Rob van den Wildenberg (NED), Jared Graves (AUS), Damien Godet (FRA) and Sifiso Nhlapo (RSA), the stage was set for the first-ever men’s Olympic BMX finals. In the 36-second race, Day made it through the first corner in second position, and avoided a crash that claimed the hopes of three his opponents. Trailing only behind Strombergs for the entire run, Day wasn’t able to make the pass on the Latvian, but led a 2-3 finish for the U.S. with Robinson just behind. 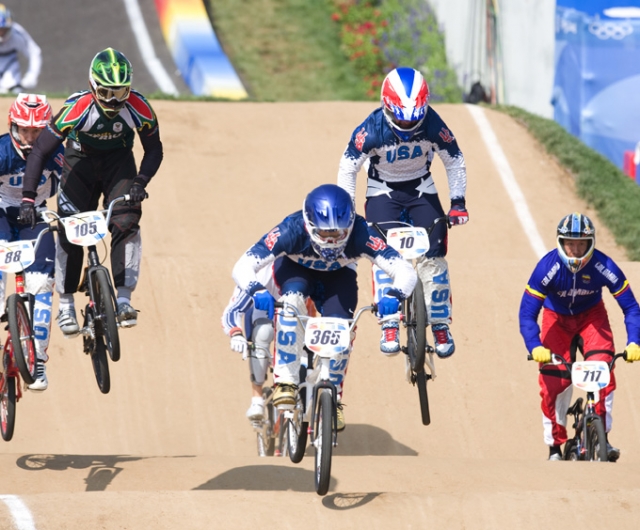